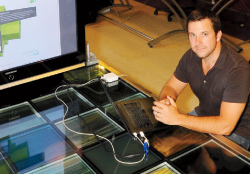 Rob Cleveland was an associate editor at Ward’s Auto World in 1994 when he began dabbling in the fledgling world of the Internet. After building a Web site for the auto trade magazine, Cleveland took a detour and struck out on his own.

“To say [the Web] was a brave new world was an understatement,” says Cleveland, CEO of Ann Arbor-based Icon Creative Technologies Group. “Not many people knew what the Internet was at the time. [It’s] still the ultimate resource tool — but when you restrict access, prepare for the worst.”

Therein lies the rub. Cleveland and his business partner, automotive journalist John McCormick, quickly embraced an old economics principle — limit supply to boost demand — to create buzz on the Web. Of course, that’s not always a positive thing. When Icon launched thefirehouse.biz for the Chrysler Group, it allowed access only to working journalists.

“The media bloggers just hated us,” Cleveland says. “But we became pioneers for breaking this new ground. The less there is of a certain item, the more people seem to want it. Sometimes the only way to get results is to take something away.”

A case in point: Icon worked with Toyota to create an online portal in which the automaker tracks thousands of procurement orders on a daily basis. To ensure that purchase orders aren’t overlooked or ignored, the Electronic Procurement Notification System prompts suppliers and purchasing agents when a certain deadline passes.

“Accountability is a big thing in any business,” Cleveland says, “and when you add in a tracking system, you can quickly find the source of the problem. But limiting access doesn’t work for every account. We do traditional campaigns, as well.”

“Auto is our sweet spot,” Cleveland says, “but we’re starting to diversify. If we stand still, eventually no one will notice.”