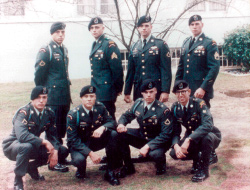 From struggling with Tourette’s syndrome and obsessive-compulsive disorder to serving as a chef to former President Gerald Ford, Clarkston native Frank Campanaro knows the road to success — whether in life or in business — takes calculated steps.

“Very rarely do you see an overnight sensation,” says Campanaro, CEO of Trillacorpe Construction in Bingham Farms. “We’re on our way to becoming an authorized nuclear contractor, but to get [here], we needed to prove ourselves. So our first project from the Department of Energy was to pave a road five miles from the Los Alamos National Laboratory.”

After completing the repaving effort and dozens of other military projects over 12 years — the company had $50 million in contracts in 2008 and employed more than 70 people — the DOE in July signed Trillacorpe to a three-year construction and engineering contract. The mentoring program, if successful, will allow Campanaro and a team of regional architects, developers, and builders to take on more demanding military projects, including at Los Alamos, N.M., one of the world’s largest R&D centers.

A decorated veteran and special operations sniper instructor, Campanaro, 43, was an Army Ranger whose squad captured former Panamanian dictator Manuel Noriega in 1989. “It was President Ford who encouraged me to follow my dream and enlist,” Campanaro recalls. “And when I got out, I was challenged by my commander to find opportunities for veterans in the private sector.”

Because military personnel sometimes struggle to re-enter civilian life (the nation’s unemployment rate was 9.7 percent through August, while the corresponding rate for veterans returning from Iraq and Afghanistan was 11.3 percent), government officials encourage veteran-owned companies to train and employ returning service personnel.

“With our local team and our global contacts, we have the capacity to build a manufacturing plant in, say, a hostile area of Africa,” says Charles F. Sills, a Trillacorpe principal and a former naval intelligence officer. “The new partnerships really [put] us in the running to bid on more varied and complicated contracts.”