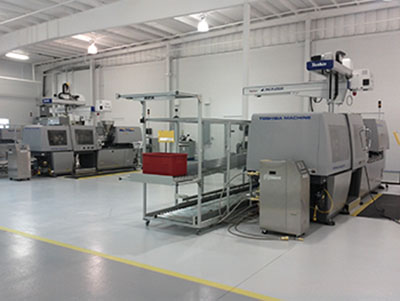 Gerry Phillips took the road less traveled … and he says that made all the difference. He worked at the top of the automotive supplier ranks with Lear Corp. and Johnson Controls before working his way to the shop floor of a startup injection molding company. In between, he helped sell Huron Plastics Group, a $100-million, family-owned firm.

“The first two or three years for us were lean,” says Phillips, now the co-owner and vice president of Prism Plastics in Chesterfield Township, founded in 2000. “We swept the floor, cleaned the bathrooms, and took out the trash.”

As Phillips and his two partners, Rod Bricker and Jerry Williams, kept a tight control on expenses, they built up demand for highly tolerant safety components used in seat belts, air bags, and brakes. “After seeing what happens when a company fails because it relied on building large volumes of one or two parts, we took lots of orders at low volumes,” Phillips says. Today, the company makes 250 million parts a year, 90 percent of which are produced using automated presses at plants in Chesterfield Township, Port Huron, and Harlingen, Texas (the latter facility serves auto suppliers in Mexico).

“After Huron Plastics Group was sold off, it was acquired by LDM Technologies, and then Plastec, which didn’t last,” Phillips says. “We tried to get clients from Plastec and thought they would come right over (to Prism), but no one wanted to be first. So we stayed with our plan of volume diversity.”

The next act for Prism is to alter its product mix, which is nearly 100 percent automotive. The company projects revenue of $18 million in 2012, up from $5 million in 2008. “We’re getting into medical devices, where there’s strong demand for highly tolerant parts,” Phillips says. “Diversity is our future.” db