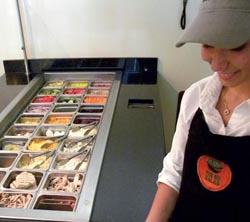 Early retirement sounded great when John Bornoty sold his Royal Oak-based technology company in 2005. But he soon found out the easy life was harder than it looked.

A restless entrepreneur, Bornoty, 40, was having lunch at a delicatessen in New York two years ago when he noticed a dark, lopsided salad bar in the corner. Taking a closer look, he saw the salad bar was no different than most others — the lettuce was wilting, a customer had accidentally dripped dressing in the cheese, and the fixings weren’t being replenished. “It was one of those moments where you knew things could have been done better,” Bornoty recalls.

After a year of research that included conducting focus groups, Bornoty realized that most people wanted the same things he did. And although many patrons are into healthy eating, they don’t always have time for a long meal, he says.

Enter The Big Salad, the first of which is on Mack Avenue in Grosse Pointe Woods. Taking a page from European-style cafes, the eatery offers colorful, refrigerated coolers of lettuce that hang above a spotless granite countertop. Flat-screen televisions display the menu, while an array of cooled and dry toppings are visible in rows behind a pane of glass. The eatery also offers soup and a variety of sandwiches.

Customers select their lettuce and toppings as a server prepares the dish — a mini assembly line, of sorts. In addition to offering more than 40 vegetables, seafood, meats, and dry toppings, there are 30 different dressings to choose from.

The Grosse Pointe Woods location is the first of a projected 200 stores slated to open throughout the Midwest over the next 10 years. A Troy eatery is scheduled to make its debut on Sept. 12, and a third location will open in Royal Oak next spring. “I think (Michigan) is a great place to expand,” Bornoty says.

After much debate, Bornoty settled on ceramic dishes and heavy-duty silverware, to give patrons a true dining experience rather than ordering up another fast-food atmosphere. He also created meal trays with raised sides, to prevent soup and drink spills. “It’s the little details that get you to great,” he says.

In the future, a rewards card will allow customers to order from one of several kiosks in the store. A phone application that will enable patrons to pre-order their meal is in the works, as well.

“There are very few healthy alternative places to eat (in a hurry), and we’ve learned that there’s a demand for it,” Bornoty says.