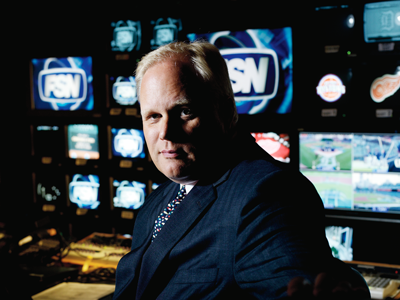 With two gold-plated Emmy Awards for station excellence sitting on a credenza five feet from his desk at FSN Detroit’s Southfield headquarters, Greg Hammaren can’t help but keep his eyes on the prize.

Since taking over in 2002 as vice president and general manager and turning the regional sports network into one of the strongest in the country, Hammaren has doggedly pursued a business plan to keep the station on the leading edge of innovation, production, and marketing.

Under Hammaren’s watch, the station launched FSN HD (high-definition) broadcasts, introduced the alternative channel FSN Plus, and relocated and renovated its offices. With a steady increase in ratings and programming, FSN Detroit has become Michigan’s No. 1 cable network in prime-time viewership.

But in March, Hammaren made perhaps his best play to date by scoring a “hat trick” when he secured exclusive broadcast deals with the Red Wings, Tigers, and Pistons that will run for at least 10 years. With a total value of more than $1 billion to the teams, and secured cable licensing deals in place, the cemented business partnerships bode well for the station, the teams, and sports fans throughout Michigan.

“The key benefit of these deals, from our standpoint, is with costs now projected out, and revenue for the most part being known, I can move forward … and explore new platforms,” Hammaren says.

Tom Wilson, president and CEO of Palace Sports and Entertainment in Auburn Hills, which owns the Pistons, was impressed with Hammaren’s ability to secure the monumental three-team deal. “Greg kind of pulled off a minor miracle because it was a bit of a minefield to put this all together, figure out where all the programming goes, and somehow keep everybody happy,” Wilson says.

With the new agreement, for the first time, FSN owns the rights to all the Pistons telecasts, just as the network does with the Tigers and Red Wings games.

“Anybody can deliver a big check to these teams, and somebody could probably always pay them more,” Hammaren says, “but we became the preferred partner because of our marketing support, production, and distribution expertise.”