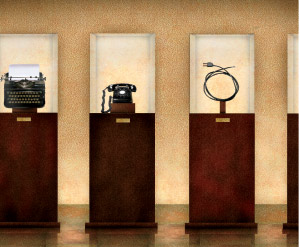 A functional desk is usually bound to the wall with power cords: one for the lamp, the computer, the phone charger … the list goes on until there’s a thick tangle of wires to step over or bend under.

But Fulton Innovations Inc., a technology licensing company based in Ada, near Grand Rapids, has created a product that will rid offices and homes of power cords altogether. It’s called eCoupled technology.

Here’s how it works: Two small magnetic coils are strategically placed — one in the appliance being charged and the other in a charging surface such as a desk or a tool box. The two coils channel energy through the air between them. As soon as a device such as a laptop or a BlackBerry touches the designated powering surface, it begins to charge. When the charge is complete, the energy stops, which eliminates battery overheating or any risk of electrocution.

The technology is 98 percent power-efficient, and safe for any home or workspace, according to Fulton Innovations director Brett Lewis. It was originally developed by inventor Nikola Tesla in the 1890s, but never reached the commercial stage.

Lewis says the space between the charging surface and the device is so small that there are “no stray fields” of electricity in the air. But it’s not just for offices; eCoupled can also be used with kitchen appliances and power tools. “If a truck was driving down the road,” Lewis says, “tools would be charging as they drove from worksite to worksite.”

The wait for cordless power won’t be long. Lewis expects eCoupled-compatible appliances to hit the market as early as the first quarter — and they won’t be outrageously priced. “We want [eCoupled technology] to be built into the environment,” Lewis says, adding that Fulton is working with hotels and businesses to get the eCoupled wiring built into furniture. “You’ll see eCoupled tabletops at Starbucks.”