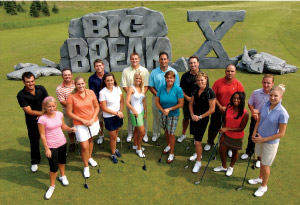 Everyone reacts differently to pressure, especially on the golf course. Hitting a 300-yard drive from the first tee amid a crowd of people can be daunting. But add in a production crew from the Golf Channel, along with competition from tour professionals, and the stress can be unbearable.

“I had one player say the only time [she] felt this kind of pressure was on the first tee at the U.S. Open,” says Mark Mitchell, the show’s public relations manager and an 11-year veteran of the Golf Channel.

Around 1,500 contestants apply to get on the Big Break, now in its 10th season. It’s the second time the show has been set in Michigan (Treetops in Gaylord first hosted the event in 2003). The show is a nerve-wracking test of shot-making skills, where losers of each day’s series are eliminated, and the winners move on to play for a coveted spot in a 2009 PGA or LPGA tournament. In addition, the winners receive cash, the use of a BMW sports car, and other prizes.

The time it takes to move the cameras and other equipment into position makes for a long day and adds to the pressure on players as they spend their time standing around, thinking about the next shot — or the one they just missed. And although the contestants are up by 6 a.m. to have breakfast and warm up, they’re not told what the day’s challenges will be until they’re driven separately out to a hole on the course, where the crew and cameras are set up.

Not surprisingly, Big Break is big on secrecy. Resort guests are shooed away if they come too close to the shooting, and contestants are forbidden any outside contact, even surrendering their cell phones during filming (The Boyne show is airing presently and will conclude at year’s end; it will also be rebroadcast in the winter.)

All contestants must have a golf handicap of 2 or lower. The MSU connection, Casey and Rachel Lubahn, were the only married couple on the series. Casey is the assistant coach of the Spartans men’s golf team, while Rachel is a teaching professional at MSU’s Forest Akers Golf Club.