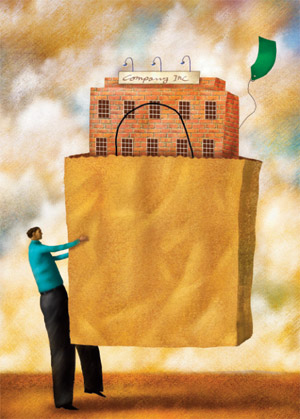 Michigan Orthopedic Services, a 14-year-old family-owned company in Livonia, was profitable and growing. But founder and CEO Aziz “Ozzy” Naser was at a point where he was constantly working and growing anxious about taking his business to the next level.

So he hired someone to research private-equity firms that would be interested in buying his company. “We started with 100 companies,” Naser says. “[Then we] narrowed it to six, and then two.” Finally, Naser chose Detroit’s Huron Capital Partners for its reputation of bringing prosperity to the companies it purchases — and for typically bringing its investors returns that exceed 60 percent.

Mike Vlasic, chief executive of Vlasic Investments LLC in Bloomfield Hills, says many equity firms are like home-run hitters. “But the Huron guys want to get on base,” he says. “They take intelligent risks. They’re as talented as any of the equity teams anywhere. They’re smart, careful, and dedicated to what they do.”

Vlasic, who was an original investor with Huron Capital, has contributed to all three of its funds. “They just raised Huron III last year,” he says. “When IV comes, we’ll invest in that, [too].”

Last year was a stellar one for Huron Capital. It completed 14 acquisition and divestiture transactions valued at more than $225 million. The company specializes in investing in well-run, middle-market companies with revenue up to $200 million. To date, it has acquired or invested in 40 companies.

This year, says managing partner Brian Demkowicz, Huron Capital wants to close more than $200 million in transactions. “Three new platforms and eight deals are realistic for this year, given the economy we’re in,” he says. Demkowicz acknowledges his company has been prosperous, despite the challenging economic times in Michigan and across the country. But “Huron has gone beyond our expectations.”

Huron Capital was founded in 1999 by Demkowicz, William Campbell, William McKinley, and Scott Reilly. In the late 1990s, there was a serious lack of private capital in Michigan, and then Gov. John Engler was pushing to attract equity investors to the state. Campbell and McKinley, co-founders of W.Y. Campbell & Co. and Peninsula Capital Partners, which they still run with Reilly, were interested in bringing another private-equity firm to Detroit.

Huron Capital likes to buy companies in noncyclical industries. It favors label, packaging, and printing companies, specialty chemical and coatings businesses, and transportation, health-care, and education companies. It avoids cyclical industries, such as steel and automotive. “We only get involved in industries where we’re a value-added partner,” says Huron Capital partner Peter Mogk.

Charlie Huebner, managing principal of RCP Advisors in Chicago, a fund-to-fund private-equity firm, says Huron Capital would be considered a high-quality buyout firm no matter where it was located, but it stands out in Detroit. “They’re one of the top [private-equity firms] of their peers in the nation.”