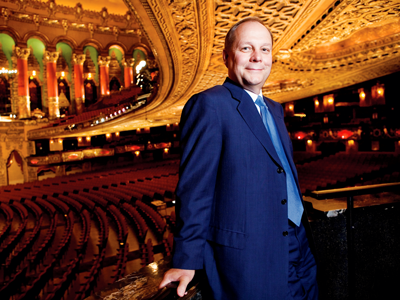 Strike the lights, stoke the band, and raise the curtain. The Fox Theatre and Masonic Temple will be hosting more Broadway productions, concerts, and holiday shows in the coming months. All of which will lead to increased revenue and employment at Olympia Entertainment in Detroit, the multi-venue enterprise owned by Mike and Marian Ilitch.

The bid to boost entertainment boils down to dollars and cents, says Dana Warg, who will soon celebrate his first anniversary as president of Olympia Entertainment. In addition to the Fox and Masonic, Warg oversees operations and bookings at Joe Louis Arena, Comerica Park, Cobo Arena, and the City Theatre (inside the Hockeytown Café). “We plan to increase the activity level of our sports and entertainment offerings by up to 40 percent because Detroiters have shown they’ll support talent and quality,” Warg says. “When we have Sesame Street at the Fox, it outsells everyone in the country, including New York.”

A native of Honolulu, Warg has spent the last 26 years operating and working with entertainment venues such as the Staples Center in Los Angeles and the Colosseum at Caesars Palace in Las Vegas. “Content is king,” he says. “We’re looking to open the eyes of national booking agents to all the possibilities for entertainment in Detroit. Our mission is to book quality over volume.”

Last year, Olympia Entertainment hosted more than 10 million guests. The number will rise substantially this year, thanks to the addition of the Masonic and a deep playoff run by the Detroit Red Wings, which resulted in the team’s 11th Stanley Cup title.

In turn, Warg is overseeing plans to improve the aesthetics in and around the Masonic. “We’ll increase the number of business meetings, banquets, weddings, and catering offerings,” he says. “The Masonic has a lot of potential, and we now have filmmakers looking to use it due to the [recently enhanced] tax breaks.”