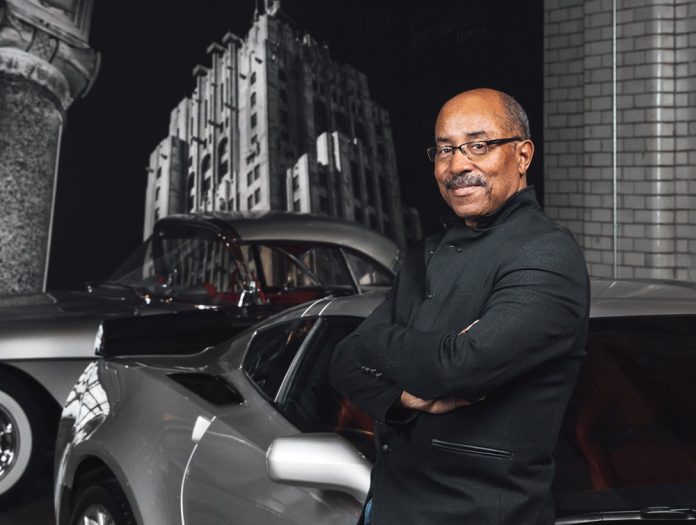 Is there life after a prominent career as vice president of global design for General Motors Co.? Ed Welburn, who retired from the Detroit-based automaker last year following a career that began in 1972, is out to prove that lightning can strike twice.

Last November, he opened The Welburn Group on the first floor of a historic fire station along Lafayette Boulevard in Detroit’s Corktown district. Under a restored oak ceiling and among white-glazed bricks, Welburn added a heated floor, a kitchen, a small bedroom, and an office.

The main room is outfitted with furniture, display cases for his numerous design awards and mementoes, and three of his vehicles — a 2016 Corvette Z06, a 1957 silver Corvette, and a 1969 Camaro, the latter painted in yellow and affectionately known as Bumblebee (a nod to the famed Autobot of the Transformer universe).

“The trick in life is to not stop and retire, but to keep going,” says Welburn, 66. “I mean, I have a lot of years ahead of me, and I’m having the best time in my life. I don’t miss getting up early every morning for work, because I couldn’t stand the rush hour traffic.”

Following his retirement last summer, Welburn took a driving tour of Europe in his Corvette Z06 that included Rome, Tuscany, Milan, and Turino in Italy; and Le Mans, Versailles, Paris, and the Champagne region in France. He also visited a number of cities in England following a trip aboard a Eurostar Train through the Chunnel.

In addition to his travels, Welburn made an appearance in the Transformers film series, as “Transformers 5: The Last Night” premiered in late June. While he couldn’t discuss his latest role at press time, he shared his first cameo in “Transformers 4: Age of Extinction,” which was released in 2014 and included numerous GM sports cars that doubled as Autobots in the film.

“At GM, we worked on every film in the series, and when (director) Michael Bay and his team would get started with a new one, they would visit us at the GM Tech Center and we would show them all of the new cars we had,” Welburn says. “For my role in ‘Transformers 4,’ I was (supposed to be) angry with star Mark Wahlberg, and it took about eight takes.

“With my first take, I played myself and was happy, and then Michael said, ‘Cut!’ And he came over and said, ‘Ed, we need you to be mean in this scene.’ So I practiced being mean, and he liked it, so they added more lines.”

In recent months, Welburn, who is a design advisor to GM, spent an afternoon with former U.S. Secretary of State and four-star General Colin Powell at his home in Washington, D.C. (Powell, Welburn says, is “crazy about Corvettes”); received an honorary degree and gave the commencement at the College for Creative Studies in Detroit; and joined the board of Exploring The Arts, an organization co-founded by Tony Bennett and Susan Benedetto.

“I continue to judge cars at the classic car shows around the country, I’m working with various design companies around the world, and there may be some more things with
Hollywood,” he says. “You asked about life after retirement? For me, there is no such thing as retirement. I move from one adventure to another.”