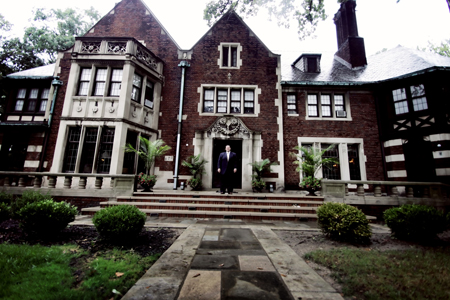 Imagine coming home to find a $4,500 gas bill waiting in the mailbox. Drew Esslinger gets them all the time, and never breaks a sweat. As the estate manager of the Charles T. Fisher mansion in Detroit’s Boston-Edison historic district, Esslinger cares for one of the region’s most prestigious manors.

“The place is a beast,” he says with a knowing chuckle. “It has a mind of its own.” Two years ago, the mansion was nearly in foreclosure when Michael Fisher, owner of the Fisher Funeral Home in Redford Township and a relative of the Fisher Body co-founder, bought the patriarch’s 18,000-square-foot Tudor Revival and installed Esslinger as the estate manager.

While in years past Esslinger would have sought out a loose network of butlers, domestic professionals, and historic experts to undertake any number of rare tasks — restoring the manor’s massive foyer organ, for example — he was surprised to find a global network of estate managers operating in southeast Michigan.

Cue Matthew Haack and Michael Wright, who founded the Domestic Estate Managers Association, or DEMA, in 2007 in Grosse Pointe. At the time, there was no organization operating as an educational resource and forum for those in the domestic service industry.

The reasons are tied to historical trends: The number of domestic servants declined after 1913, when income taxes became a permanent fixture of the U.S. tax code. “It was a different time back then and, after World War II, large estates fell even more out of favor due to suburbanization,” says Haack, DEMA’s president. “But things went too far the other way, and that’s when we saw an opportunity.”

Today, DEMA serves some 1,000 domestic professionals in 41 states and 18 countries — including Italy, France, Nigeria, South Africa, United Arab Emirates, and the Philippines — as well as 250 vendors. Annual association dues are $50 for estate managers and $1,000 for vendors.

As a matter of course, a well-trained staff is essential to the stability of any estate. When a domestic manager leaves, the whole equilibrium of the relationship between the owner and the staff is upset. “What happens to confidentiality? What happens to loyalty? What happens to the investment in training? That’s where we come in,” Haack says. db