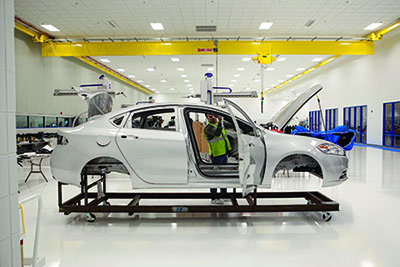 Automotive manufacturers, having battled it out on showroom floors for more than a century, are suddenly looking for ways to work together. The pressure to meet costly fuel efficiency mandates, along with the development of autonomous vehicles, is generating demand for expensive hardware like advanced engines, GPS-enabled guidance systems, higher-strength steel, and exotic materials.

While animosity has long defined the relationship between General Motors Co. and Ford Motor Co. — think back to 2011, when GM Chairman and CEO Dan Akerson remarked that Ford’s planned resurrection of its Lincoln brand was over before it started: “You might as well sprinkle holy water” on it, he said — more recently the two companies have formed a joint venture to develop nine- and 10-speed automatic transmissions. Mercedes-Benz and Infiniti, meanwhile, have teamed up to offer a new generation of compact coupes and sedans. And the tie-ups go on and on.

The fast-approaching 34.1-mile-per-gallon Corporate Average Fuel Economy (CAFE) mandate that takes effect in 2016, and the more rigorous 54.5 mpg target the federal government has set for 2025, have driven up R&D costs and ignited a war for talent. More and more, suppliers are working closer together and the automakers, along with the military, are tapping the research labs of major research universities like never before. In some cases, universities are partnering amongst themselves on robotic, engineering, and unmanned vehicle programs.

By some estimates, the 2025 CAFE standard could add as much as $10,000 to the cost of a new vehicle. “It’s partner or die,” says David Cole, chairman emeritus of the Center for Automotive Research in Ann Arbor. He’s even developed a word for the recent spate of alliances and joint ventures: “coopetition.”

Consider, GM has spent several billion dollars on the Chevrolet Volt and the upcoming Cadillac ELR plug-in hybrids. It’s likely to invest several times as much to make its conventional gasoline engines more fuel-efficient. Ford is rapidly tapping its own bank account on programs like the EcoBoost engine while developing an array of hybrids, plug-ins, and pure battery-electric models such as the C-Max Energi and Ford Focus Electric. To speed the process along, it formed an alliance with Toyota to develop advanced hybrid systems for future versions of the F-Series pickup and other large truck models.

The good news is that advanced technological breakthroughs like electronic stability control have saved thousands of lives annually, according to the National Highway Traffic Safety Administration. But that’s only encouraging lawmakers to rapidly ramp up more fuel-efficiency and safety requirements. Despite the adage that “safety doesn’t sell,” it’s quite clear that the pace of change is so rapid that what once was considered science fiction is now quickly approaching reality.

Already, states like Nevada and California are handing out licenses to manufacturers and suppliers to test fully autonomous vehicles on roads (a driver must be behind the wheel at all times). Anthony Levandowski, who oversees the Google autonomous research program, insists self-driving vehicles are swiftly getting ready for prime time. “I don’t think we need to wait 10 years for the next model or body styles to come out to build this technology,” he says.

The bottom line is that even the richest of manufacturers now faces the sort of challenges that make it impossible to operate independently. And that’s all the more true considering the industry is still facing serious financial challenges in key markets such as Europe.

As it stands, the three-year alliance between GM’s European subsidiary Opel and erstwhile French rival PSA Peugeot Citroen could save both companies. With sales in the European market slipping to the lowest point since 1995, Peugeot is struggling for its very survival. And Opel isn’t in much better shape after suffering its 14th consecutive annual loss in 2012.

Peugeot is desperately short of cash, needs an infusion of new product, has to bring capacity in line with demand, and must find some ways to slash billions from its bloated cost structure. At GM Europe, the division’s combined loss since 1999 has reached $17 billion. It’s no wonder Morgan Stanley analyst Adam Jonas recently issued a report arguing that “We believe the time has come for GM to find a new home for Opel.”

For the moment, GM management is standing behind the subsidiary. Vice Chairman Steven Girsky is frantically working up a turnaround plan he hopes will bring the division back into the black by mid-decade. So far, more than a dozen top managers, including former CEO Karl-Friedrich Stracke, have been let go or reassigned. Girsky also has announced plans to close a plant in Belgium and hopes to shutter at least one more in Germany; no easy feat, considering government restrictions and the foot-dragging of the militant union IG Metall.

There are more than a few skeptics who question whether GM and Peugeot can pull off their plan. But the two automakers likely have no other choice, just as Nissan realized when Renault approached it in late 1999. Following years of mismanagement, Nissan was on the verge of collapse. And once a merger was announced, few believed it would work. Former GM Vice Chairman Bob Lutz warned the French at the time that they’d be better off “taking $6 billion in gold bullion, loading it onto a barge, and sinking it in the middle of the ocean.”

If anything, the Renault-Nissan Alliance has become the benchmark for such partnerships. The two companies trimmed costs by billions of dollars while adding a wide array of products to their lineups, says Carlos Ghosn, CEO of both automakers.

Even so, it came as a shock across the industry when Renault and Nissan welcomed a third member to their club in 2010. As often happens with industrial alliances, Germany’s Daimler AG outlined relatively modest plans, at least at first. But, “Over time, we have built up so much trust we are working like hand and glove,” says Daimler Chairman Dieter Zetsche.

Among the various projects already approved, Renault is working up a new version of its Twingo small car that will provide a much-needed supplement to Daimler’s fast-fading Smart brand. Offering room for four people, the vehicle should reach the marketplace by 2015. In return, Renault and Nissan will gain access to the chassis used in the new Mercedes-Benz A-Class and B-Class series. In the coming years, the partnership will contribute to new models coming from Nissan’s luxury brand, Infiniti.

The first significant payoff from the expanding partnership is just rolling out in the form of the Mercedes Citan urban van, which will replace the Renault Kangoo. At the same time, Nissan plans to start producing four-cylinder engines at its Tennessee powertrain plant that will be used in Mercedes C-Class models assembled in Alabama.

“We still have plenty of ideas in the pipeline,” Zetsche says. He adds he and Ghosn are discussing the possibility of adding a wing for Mercedes at Nissan’s planned manufacturing plant in Aguascalientes, Mexico. The deal would allow both companies to take advantage of shared supplier and distribution networks, among other things. And, if the added space is approved, the Mercedes plant would likely roll out vehicles for both the German luxury marque and Infiniti, company officials reveal.

“Nothing is off-limits,” says Zetsche, who then corrects himself to say that the partners have firmly ruled out a three-way merger. That’s perhaps no surprise, as Zetsche admits such a close partnership would be difficult to sell to the company’s supervisory board considering the failed “merger of equals” between Daimler and Chrysler. “Perhaps referencing our history, we are glad we don’t have a merger,” Zetsche says.

But alliances, he contends, offer a number of potential advantages, including the ability of the partners to simply walk away if things don’t work out. On the other hand, Ghosn warns, it’s critical to avoid being so lax about an alliance that the partners don’t make the necessary commitments to ensure its success.

There are some essential rules, he stresses. For one thing, it’s imperative to find a partner “with whom we do not directly compete.” Even in the luxury segment, there is little overlap between Mercedes and Infiniti buyers. It’s also critical to “make sure you have support from the top down,” he adds, so that even the lowest-level managers understand the importance of making the alliance work.

That was not the case with the DaimlerChrysler partnership. The European and American companies never truly melded into a single operation with a common goal. “After nine years in Detroit we had less on our hands compared to what we (had) at the start” of the new alliance with Renault and Nissan, laments Zetsche, who had to wipe out billions of dollars in shareholder value as he unwound the DaimlerChrysler merger. The failed partnership clearly led some manufacturers to shy away from potential tie-ups, but that’s no longer the case.

Even Toyota, a company that has long prided itself on being able to do things on its own, is changing its tune. The Japanese giant has been lining up a string of new alliances over the last several years, including advanced powertrain technologies where the company has long been seen as the industry leader. “No one can handle it all by themselves,” says Yoshi Inaba, president and COO of Toyota Motor North America.

Until recently Toyota was reluctant to invest in advanced battery technologies, especially those based on lithium-ion chemistry, given the formulation turned out to be prone to defects. But with competitors such as Nissan and GM aggressively embracing lithium batteries, Toyota found itself falling behind and “playing a game of catch-up,” says Aaron Bragman, an analyst with IHS Automotive.

Although Toyota developed the relatively modest Prius plug-in hybrid in-house, it turned to the ambitious Silicon Valley startup, Tesla Motors, to develop the battery driveline for the new RAV4-EV. While the design may be familiar to fans of the crossover-utility vehicle, the vehicle’s underlying electric drivetrain is the same basic system used in the Tesla Model S.

Toyota also plans to partner with Tesla on a new battery-electric sports car that should reach the marketplace around 2015. In turn, Tesla credits another partnership with Daimler for helping it survive the long wait before the launch of the Model S, its first mainstream battery car.

There’s also a new alliance between Toyota and BMW. The German automaker committed to supplying diesel engines to the Japanese company for use in Europe, while Toyota will help its counterpart on advanced battery technology. German news reports also disclose the two companies are exploring a wide range of opportunities that could include hybrids, fuel cells, and vehicle electronics.

But not everyone has embraced the alliance concept. For much of the last two decades, Ford closely aligned its product development with that of Japan’s Mazda Motors. That strategy was all but canceled by Ford CEO Alan Mulally, who pared things back to better focus on core operations. Mazda, however, has been actively searching for a new partner that many analysts believe will be critical to its long-term viability.

Then there’s Volkswagen AG. The German automaker’s current lineup includes 245 different models, with more on the way in just about every possible market segment but full-size pickups. That includes entry-level offerings from Czech-based Skoda to Britain’s Bentley, Italy’s Lamborghini, and Germany’s Porsche — the latest of 12 brands collected by Volkswagen.

Despite the exceptions, more alliances will develop in the coming years. The high cost of developing new fuel-efficient powertrains, safety equipment, and the rollout of autonomous vehicles is too much for any one automaker to weather alone. “You’ll be hearing more about the ‘Carlos and Dieter Show,’ ” Zetsche says. db