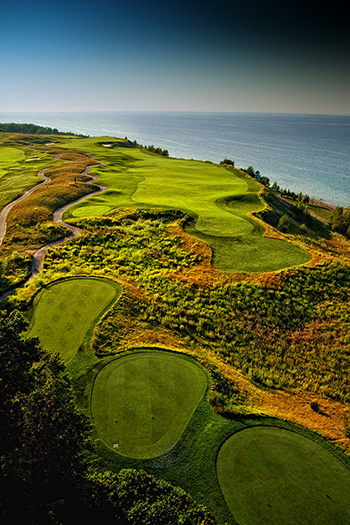 In a bid to recast northern Michigan as a world-class golf vacation destination, the operators of nine resorts are resurrecting a bit of their past to ensure their financial future.

Resort operators have dusted off an ambitious slogan from the 1980s, when Michigan was a hotbed for golf course construction: “America’s Summer Golf Capital.” The goal is to cast Michigan in the same light as Pinehurst or Myrtle Beach in the Carolinas, or Scottsdale in Arizona.

Given today’s more sophisticated marketing opportunities, online offerings, and electronic reservations, the resort owners and one golf course operator are confident that this time around they have the formula to take their businesses to another level. Adding to the optimism is a new partnership with Pure Michigan, the state’s marketing campaign. Each resort signed a deal in March agreeing to chip in $55,000 for advertising and marketing programs, with the state doubling each investment.

The former program was more laid-back; it was an association comprising like-minded golf course and resort owners who cooperated with each other on some levels. The new corporate organization, meanwhile, has officers, a board of directors, and a website.

Barry Owens, general manager of Treetops Resort in Gaylord and president of the new golf association, says by combining resources, the resorts can capitalize on the financial impact their properties make across the state’s northern quadrant. “I don’t think people know the economic engine these resorts provide,” he says. “With their employees, the payrolls, the spending on capital improvements, it’s probably over $100 million.”

The 33 golf courses among the nine resorts average more than 500,000 rounds each season — which, aside from green fees, leads to food and beverage sales, golf shop purchases, lodging, and tips, thereby generating millions of dollars in annual revenue. Prices per round of golf range from $40 to $145.

Owens acknowledges that while there is regional recognition of the quality of golf in northern Michigan, he and his partners are aware of how little presence they have had as a group. “What clinched it for me was this exercise — I would Google search ‘Myrtle Beach golf packages,’ or ‘Robert Trent Jones Golf Trail packages,’ or ‘Florida golf,’ and I would get a zillion packages popping up,” he says. “But if I Googled ‘Michigan golf packages,’ I might get Myrtle Beach golf packages popping up instead of ours.”

Owens admits the resorts need a better way to make potential visitors aware of what northern Michigan has to offer, including an impressive array of four-star resort properties, the proximity of airports large and small, and ancillary destinations like dozens of wineries and boating, fishing, and horseback riding opportunities.

“If you’re a group of 16 guys in Dallas and it’s going to be 100 degrees for the next six days in June, and they want to get away and play golf, one guy gets assigned the job to find a place to play — and we all know it’s always one guy. He might pick the one place he can make that happen with the fewest mouse clicks,” Owens says. “That’s where we have to be.”

One of the newer members of the America’s Summer Golf Capital group is Tim Norman, who took over as general manager of Grand Traverse Resort and Spa in Acme two years ago. “What I see in this organization is a partnership of the region,” he says. “There is so much to offer and so much going on up here, year-round, and even more so in the summer.”

Norman says the collection of golf courses at the nine resorts and the stand-alone LochenHeath Golf Club, next door to Grand Traverse Resort, offers golfing visitors an extensive menu. “What you don’t want is people coming here one time and thinking they’ve done everything,” Norman says. “We like to give people reasons to keep coming back. The fact that we have so much activity in the golf world, so much diversity and opportunities to play … it’s a real opportunity to keep people coming back.”

Chris MacInnes, COO of Crystal Mountain Resort in Thompsonville, says by hitching the America’s Summer Golf Capital group to the popular Pure Michigan campaign, the resorts will be able to better showcase the quality and range of choices when it comes to golf. “The two things that have changed since we were first doing this in the late ’80s are the Internet, which makes it feasible to get our word out to a national and global audience, and the reach and clout that the Pure Michigan campaign is enjoying.”

MacInnes says the ultimate goal is to attract visitors from overseas who play golf and tend to stay longer on vacation and spend more money. She says the Asian market is particularly attractive.

“The middle class in China is now larger than the entire population of the United States,” she says. “When the Chinese travel, they spend an average of $7,000. The potential market that we can reach with our world-class golf destination resorts is much greater — exponentially greater than when we looked at it 25 or 15 years ago.”

Starting this fall, Pure Michigan will kick off a marketing and advertising blitz aimed at the Chicago market. The state’s advertising agency, McCann-Erickson of Birmingham, will produce radio ads featuring the voice of actor, Michigan native, and Pure Michigan narrator Tim Allen.

“The state will run their Pure Michigan ads and we will piggyback on that,” Owens says. “We’re also going to capitalize on public relations opportunities in the Chicago area with Weber Shandwick, the PR arm for (Michigan).”

“We’re going to create three or four loops in northern Michigan that make geographic sense for visitors,” he says. “For instance, if someone comes here for a vacation, they could visit or stay at Forest Dunes, Treetops, and the Otsego Club. Or on the west side they could do Manistee, Crystal Mountain, Grand Traverse, and LochenHeath. Or they could do Shanty Creek and Boyne Mountain Resort.”

Another advantage for the summer golf group and Pure Michigan is access to the campaign’s 600,000 followers. “We’ll be able to do some giveaways that will be promoted through the radio campaigns and the state’s social media network,” he says. “If it goes well — and I’m assuming it will — we’ll turn around and do a similar spring promotion in the Chicago market, so we’ll have a tremendous amount of hits there in the fall and spring.”

Tom McGee, director of golf operations at Grand Traverse Resort, says having Traverse City’s Cherry Capitol Airport 12 minutes by car from the resort’s front door is a major asset. “Flying is the mode of transportation that most people coming from afar will use, and here at the resort it’s a great place to get things started as they come into this area,” he says. “We see that with a lot of groups already. They fly in, they stay here for five nights and they play here, they go to Bay Harbor, they go to Shanty Creek, 35 minutes away, and they play Forest Dunes, which is an hour away.”

The proximity of the airport, as well as Charlevoix Municipal Airport, Pellston Regional Airport, and Gaylord Regional Airport, contrasts favorably with travel times for golfers visiting such fabled courses like Pinehurst in North Carolina: Consider air travelers must fly into Raleigh and rent a vehicle for the nearly two-hour drive from the airport to the resort.

McGee adds the value of first-class golf in northern Michigan is a major selling point. “Compared to other places that charge sometimes twice what we do, what you get up here is a great value,” he says.

What’s more, Golf Magazine’s most recent rating of the premier public golf resorts in the country, as well as Mexico and the Caribbean, includes three northern Michigan properties: Grand Traverse Resort, Boyne Highlands, and Bay Harbor. That level of achievement puts them into the same heady and much more expensive neighborhoods as Fairmont Scottsdale Princess in Scottsdale; Cabo del Sol Beach & Golf Resort in Los Cabos, Mexico; and The Resort at Pelican Hill in Newport Coast, Calif.

“There isn’t a collection of golf courses that have more accolades, as a group, than we do,” says Crystal Mountain’s MacInnes. “If you look at the list of awards all our properties have won, it’s very impressive.”

One of the most decorated public courses in the state is the Forest Dunes Golf Club in Roscommon. Golf Magazine lists it as No. 72 in its rankings of the Top 100 courses in America. Last season, the club owners expanded their onsite accommodations from six luxury homes to a 14-room lodge located yards away from the first tee. What’s more, there’s talk Forest Dunes may add another 18-hole course.

“Our rounds went up 35 percent (last year), from 13,000 to 20,000,” says Todd Campbell, Forest Dunes’ general manager. “What was most interesting is that we had players from seven countries and 33 different states.”

“What we’re looking for are the people who are going to Ireland, or the people who are going to Pinehurst,” Friedrich says. “If they’re coming from places around the country — Dallas or Florida or California — they’re not going to come for two or three days. They tend to stay days longer. Whether they stay at Boyne or travel from one resort to another, we feel very strongly that this will be a great benefit to Michigan and our economy.”

Owens says the increase in play the resorts have been experiencing since the economy has perked up in Michigan and across the country is proof that the standard of golf his group offers resonates with players. The play at Treetops is a case in point.

That kind of traffic boosted revenue substantially in all areas of the resort, and most of the money was plowed back into the operation. “We were able to do a bunch of capital improvements in 2013,” he says. “We replaced two-thirds of our golf cart fleet and 25 percent of our golf course maintenance equipment. Our owners are recognizing the progress we’re making and allowing us to reinvest in the properties.”

Another major selling point for the America’s Summer Golf Capital program is the area’s diversity of first-class accommodations, ranging from hotel rooms and condominiums to six-bedroom homes, as well as award-winning dining options, says Chris Hale, vice president of sales and marketing at Shanty Creek Resort in Bellaire.

Most recently, Shanty Creek invested $10 million to renovate hotel rooms, meeting spaces, and an indoor pool. It also completed a reconfiguration of its Lakeview Hotel lobby and restaurant to take advantage of a 180-degree view of Lake Bellaire meandering across the valley below the resort.

National followers of the industry have taken notice. Conde Nast Traveler magazine recently ranked Shanty Creek among the 120 top golf resorts in the world, while rating the operation and its four golf courses the No. 1 golf resort in Michigan. “When you face the westward direction and you get those sunset nights, it’s pretty spectacular,” Hale says.

For this golf season, the resort will unveil its latest amenity, a 9,000-square-foot rustic bistro-like restaurant in its other hotel, The Lodge at Cedar River. Hale says the restaurant will feature themes that incorporate its setting on the river and the nearby streams and lakes.

Like others in the summer golf capital group, Hale is looking forward to a busy season. “We’ve had groups stay in our six-bedroom homes that sleep up to 16 people,” he says. “When you put two or three of those together, all of a sudden you have a group of 48 people staying and creating themselves a block party.” db