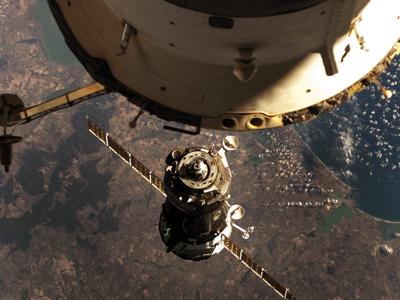 NASA was looking to better prepare astronauts for injuries that might occur in space and to adapt to strategies used by physicians. After all, the tools used in space are limited — radiation equipment, such as a CAT scan, isn’t allowed — and physicians are rarely on board. But Dulchavsky reasoned that an ultrasound machine could be put on a spaceship or shuttle.

“We developed a training program for teaching astronauts how to use an ultrasound machine in space, and we found that it was a fast, economical, and portable way to determine the extent of illnesses or injuries,” says Dulchavsky, chair of Henry Ford’s surgery department in Detroit. “And in developing the training, we found you need little-to-no medical background to use an ultrasound machine to determine basic injuries.”

Since the $20,000 machines are roughly the size of a laptop computer, a plan was put in place to include portable ultrasound devices on space missions. In addition, Dulchavsky worked with NASA team members to develop satellite hookups and communication plans so an ultrasound could be sent from space back to Mission Control, where physicians could better support astronauts millions of miles away.

Ground Control was so impressed with the system that word reached the United States Olympic Committee. As a result, a small team of Henry Ford physicians was on-site at the recent summer games in Beijing to help determine if an injury to a runner, weightlifter, or other athlete was serious in nature.

The system is being used in other ways, as well. Earlier this year, a Canadian mountain-climbing team took one of the portable devices to Mt. Everest. From a base camp inside a small tent, Dulchavsky was able to diagnose a lung problem with the help of a portable satellite phone equipped with video. Even the United Nations has taken notice and is working with Dulchavsky and others to determine the practicality of using portable ultrasounds in far-reaching regions of the world that lack high-quality medical care.

“It’s amazing because we’re looking at ways to make this device more compact, portable, and, in essence, plug-and-play in nature,” Dulchavsky says. “The entire concept started when we were trying to help humans flying in space, and now the benefits can extend to helping humans anywhere on earth.”