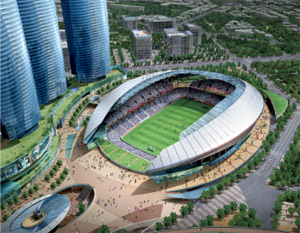 Beginning with their design of the Palace of Auburn Hills in 1988, architects Gino and Matt Rossetti revolutionized sports arenas by bringing corporate suites closer to the action. Now their Southfield-based design firm, Rossetti Architects, is at the forefront of another trend in sports — creating mini-cities around new and existing arenas.

One of the first so-called “sports cities” is slated to open in Inchon, South Korea, in 2012. In addition to a Rossetti-designed 20,000-seat soccer stadium, neighboring development will offer a mixture of residences, hotels, offices, shopping, and restaurants to complement the roughly 20-acre project. The firm is working on a similar development in Milan, Italy.

“More cities are putting together public/private partnerships that require a developer to build a soccer stadium, for example, and give it back to the community in exchange for the surrounding land,” says President Matt Rossetti. “That way, everyone takes a risk.”

The sports city concept can work around existing stadiums if the respective community or a developer can gain land-control and zoning changes, Rossetti adds.

“When we designed Van Andel Arena in Grand Rapids, the city really pushed for other neighboring projects,” he says. “And you saw what happened in the LoDo District around Coors Field (in Denver). I don’t think that would’ve been as successful without the baseball stadium.”

In addition to sports cities, Rossetti Architects, which recently completed the Greektown Casino Hotel in downtown Detroit, continues to add to its design portfolio of soccer stadiums. The firm has designed or is the process of creating soccer stadiums for Major League Soccer’s New York Red Bulls, Chicago Fire, Los Angeles Galaxy, Philadelphia Union, and three other teams.

“Professional sports team owners like Lamar Hunt and Philip Anschutz really got Major League Soccer going, and it was a league of billionaires,” Rossetti says. “They’ve had some good success. When they bought their franchises, they were worth around $5 million, but today
franchises are selling for $35 million to $40 million.

Although soccer is the world’s most popular sport, Rossetti says it doesn’t carry the same cachet in the United States. “With soccer, the U.S. was never No. 1, but now, many of the teams in the Premier League (in England) are over-leveraged because they played their star players too much. So it’s going to open up opportunities for younger players to come to the U.S.,” he says.

In addition to increasing the promotion of soccer, Rossetti says team owners have made a concerted effort to build soccer-only stadiums in the United States.

Initially, soccer was played in football or baseball stadiums, but the league suffered because they couldn’t draw enough fans.

“If you go to a soccer match at a football stadium and it’s only half full, you feel like you’re missing something,” Rossetti says. “But in sports, scarcity is everything. By designing new soccer stadiums for around 20,000 people, you really create a great atmosphere; plus, you can bring in concerts on the off-nights. It’s a win-win for everyone.”