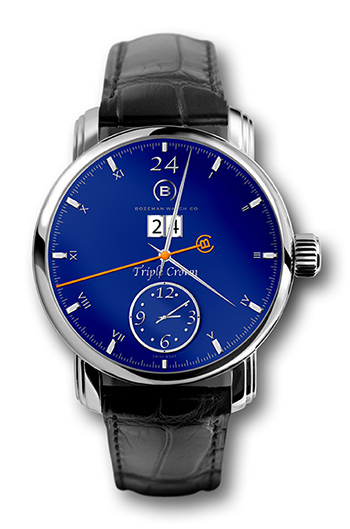 It’s not every day a shop owner sees someone like Detroit Tigers star Miguel Cabrera walk through the door of their business. But that’s what happened to Chris Wardle, founder and CEO of Bozeman Watch Co. in Birmingham.

The result was the creation of two limited-edition watches: a $9,400 timepiece to commemorate Cabrera’s Triple Crown season in 2012, and a $8,900 watch called Smoke Wagon — a term that refers to the first baseman’s hitting prowess. “The Triple Crown Dual Time watch will have Roman numerals for one through 11, and the 12 will actually be ‘24’ for Miguel’s jersey number,” says Wardle, who started his business in Montana in 2005 and still has a store there. The Michigan native opened the Birmingham store last year.

Only 88 of the Triple Crown watches will be produced, while 200 timepieces will be built under the Smoke Wagon label. The first 10 to 20 people who pre-order a Cabrera-inspired watch will receive a signed jersey, various perks, and personal time with the slugger.

In addition, a portion of the proceeds from the nearly 300 watches will be donated to the Miguel Cabrera Foundation, a nonprofit started by the infielder and his wife, Rosangel, that revitalizes baseball fields, promotes student engagement, and provides scholarships.

“Each watch has a custom date function, meaning there are two separate discs (to mark the days in the calendar),” Wardle says. “Each watch will be highly decorated and will evoke timepieces from the 1940s and 1950s. It’s the finest movement we’ve ever built.” db