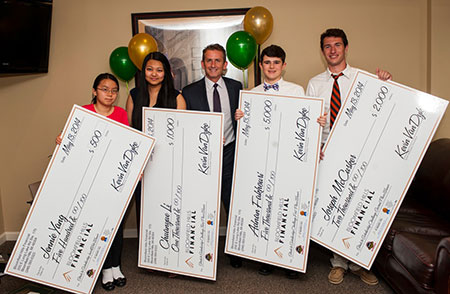 Adnan Fahkouri, a freshman at Wylie E. Groves High School in Beverly Hills, didn’t ride a wave of popular stocks from Google or Apple on his way to winning the 2014 Stock to Scholarship Challenge. Rather, he shorted 31,000 shares of Plug Power Inc. and wound up earning $26,000 over two months.

The mock investment, an annual contest sponsored by Kevin Van Dyke, founder and president of Bloomfield Hills Financial in Bloomfield Hills, is designed to teach high school students about the intricate world of high finance. “To see these students compete is one of my favorite things,” Van Dyke says. “It reminds me of when I started investing as a teenager.”

Fahkouri, who loves both biology and investment markets, says he had a hunch that Plug Power, a fuel cell provider that’s listed on the NASDAQ, was overpriced and would fall in value.

“If you buy a prominent stock, you can’t expect it to go up 25 percent in two months,” Fahkouri says, “so I tried to pick smaller stuff that would go up or sell short.”

More than 600 students from metro Detroit competed in the challenge, which provides $8,500 in college scholarships. Fahkouri won $5,000. The contest, which concluded in late April, provides students with access to an online stock market account seeded with $100,000 in play money so they can purchase stocks.