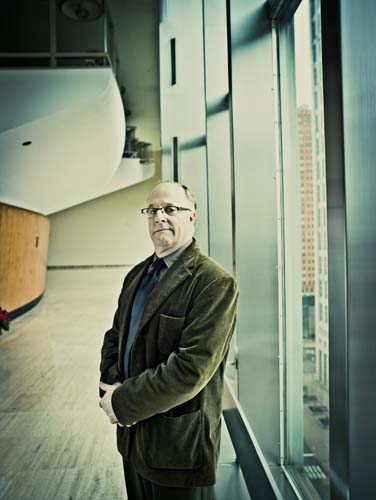 For more than 20 years, Doug Wood, (left), worked as a high-powered creative director for ad houses that helped build venerable brands like Mazda, Jaguar, and Volkswagen. But when the recession hit four years ago, Wood’s job evaporated as ad dollars and marketing budgets all but disappeared.

Wood, who had been gainfully employed since graduating from college, found himself in what has become an increasingly common predicament for executive workers: loaded with experience and skill sets, but no place to use them. Employers that were hiring were looking for young grads with digital experience, Wood says, and seemed to view his portfolio as an anachronism instead of a reason to hire. “They’d look at my book and they’d say, ‘Wow, you’ve done all this stuff, but not an L.L. Bean website,’ ” he says.

To bridge the divide, Wood went back to school to bone up on his digital skills. He also helped a friend launch a barn construction company. All of it, he says, generated a sense of stability. But he had no idea that the next step in his journey would include getting up front and personal with the very unstable world of entrepreneurs.

Through a neighbor, Wood discovered Michigan Shifting Gears, a four-year-old program that aims to transition executives from the structure and regimen of the corporate world to the frenetic, aspirational ecosystem of entrepreneurs and small businesses.

Launched by Ann Arbor Spark, a nonprofit business incubator, the program was adopted last year by Michigan Economic Development Corp., a quasi-public economic growth agency. The curriculum provides participants with various tools to help them transition between careers — a host of workshops, networking opportunities, practice interviews, and skilled training. The program’s centerpiece is an 80-hour pro bono internship with a startup or small business that often operates on little more than willpower and an idea. Wood and others are also paired with an executive mentor, with the expectation that the relationship be real and substantive. Gov. Rick Snyder, who helped start Shifting Gears during his years as a venture capitalist, served as a mentor during its inaugural run.

The end goal, says Faris Alami, entrepreneurial talent champion at TechTown, the Wayne State University-affiliated technology business incubator, is to retain executive-level talent in the state by teaching individuals how to shift from chasing scarce opportunities in the corporate world to finding those in smaller business environments. Startups and small businesses that participate in the program and hire graduates benefit from a wellspring of top talent that can help them grow or attract funding from venture capital firms and other lending sources.

So far, the program’s stats are impressive. About 35 percent of its 100 graduates have landed a new job within three months, 55 percent found work within six months, and 80 percent were hired within nine or more months. By this summer, another 100 people will have graduated from the program. As for Wood, he landed a job as arts and culture coordinator for the city of Detroit via TechTown’s Talent Placement Program.

Even so, Alami says, Shifting Gears, also available at Oakland Community College in Auburn Hills, is “not a job placement program.” Instead, it’s a crash course in how to trade in the comfort of a corner office for the adrenaline rush of growing basement startups. Being uncomfortable comes with the territory, he says.

Metro Detroit has no shortage of talent, says Diana Wong, a business professor at Eastern Michigan University in Ypsilanti who helped found the program. But there’s no easy way to connect the right talent with small business owners. And even when they do connect, owners have a growing reluctance to hire pedigreed executives because of repeated anecdotes about the problems that come when corporate expectations and small-business realities collide, Wong says.

One example: A solar battery company hired a marketing executive who, on paper, was the perfect hire. Within weeks, however, the perfect hire withered in the think-on-your-feet, fast-moving environment of the company. “He came out of a large corporation and had always been given orders from above,” Wong says. “He couldn’t just take a whiteboard and think and do. … That exec left after nine months and set the company back two years. We have dozens of these stories.”

Performing under pressure and in the face of ambiguity are priority lessons in the program. Participants are immersed in hands-on sessions and workshops, intensive simulation exercises that hammer home small business fundamentals, and the 80-hour pro bono internship. Participants switch tasks frequently and are asked to handle situations that require skills well outside of any previous job description.

Not to be denied, Wood dove in and completed five, two-week internships helping startups do everything from designing basic marketing materials and websites to reminding hard-charging associates to sleep after 48-hour work sessions, lest they become incoherent.

“For some, you end up becoming the voice of reason,” Wood says.

The experience is disorienting at best, but well worth it, participants say. “You really need to check your ego at the door,” says Ramiro Ramirez, an engineer-turned-sales-executive who climbed the corporate ladder making stops at such companies as GM, Hewlett-Packard, and IBM.

Last June, Ramirez was hired as a global business development manager for Plymouth-based Link Engineering Co., a mid-market, family-owned vehicle parts testing equipment manufacturer. “One of the things I learned is that, first and foremost, you’re working for the company; you become a part of that family, and you’re willing to do anything to push the company forward,” whether you get credit for it or not, Ramirez says — a sharp turn from his experience in corporate culture.

Despite its rigor, the program has had full classes (or cohorts, in Shifting Gears parlance) since its inception. Participants pay $500 (10 percent of the $5,000 program) to undergo the mental retooling and career overhaul. The state subsidizes the rest.

Participants, who have been searching for jobs for months or even years, often come to the program depressed and isolated, says Amy Cell, MEDC’s senior vice president of talent enhancement and an early champion of Shifting Gears. Finding and bonding with a group of people undergoing similar challenges is an intangible, if vital, benefit, she adds.

“When you’re looking for employment, you forget you have valuable skills,” says Cynthia Peele, a veteran human resources executive with experience in senior positions at companies such as ConAgra Foods and Ford Motor Co. under her belt. “The program reminded me of my value.”

MEDC officials are now working to instill the program with a statewide geographical presence — something that would have been unimaginable even one year ago, Wong says. The program initially ran on the midnight oil and elbow grease of a small but dedicated staff of volunteers. Now state officials are working to create similar courses for software programmers, and to transition veterans from life in the military to that of the business world.

For programmers, MEDC launched Michigan Shifting Code in January, Cell says. The effort aims to transition workers with IT degrees into new careers as professional coders. The demand for the programs is incredible, she says. Employers had talked about a need for more high-level coding talent, and IT workers were hungry for the opportunity. Case in point: A recent informational session on the program at an Ann Arbor bar was expected to draw 50 people, but more than 600 people registered. And most of those who registered did, in fact, attend the session.

“We’re kind of an umbrella that meets the unique needs of employers (in the state),” Cell says. “Applying at least some of these elements to other problems is a good opportunity to stretch the lessons learned.”

Even if recession-spurred demand dwindles, Cell says the program can still provide a structured way for people to switch careers, or move to new areas of the state. Anecdotally, several people who moved to Michigan from other states and countries, including New Zealand, entered the program as a creative way to acclimate to metro Detroit’s business environment. “People will always be making transitions,” Cell says.

Startups are reaping the benefits.

“(The program) is a time-saver and a competitive advantage,” says Eric Stief, senior vice president at AutoHarvest Foundation, a nonprofit that aims to help automakers, suppliers, and universities create, commercialize, and license new technologies and other industry innovations.

AutoHarvest, led by automotive analyst David Cole and Jayson Pankin, Delphi’s former venture creation specialist, didn’t have the resources to hire an agency to create graphics for their website or produce key marketing materials. But Wood was able to help them with both challenges.

The key, Stief says, is to nail down what the executive intern needs to do in a way that meets their expectations. Eighty hours breaks down to two weeks — the amount of time it takes most new employees to figure out where the bathrooms are and learn how to remotely access their e-mail. “It’s not lost on me that they’re working for free,” Stief says. “We want them to feel passionate and work on something they’re interested in.”

At the same time, Stief adds, “We don’t spoon-feed anything to anybody. We’re too small of an organization. I give them much more latitude than they would probably normally receive, and push them past their comfort zone.” db