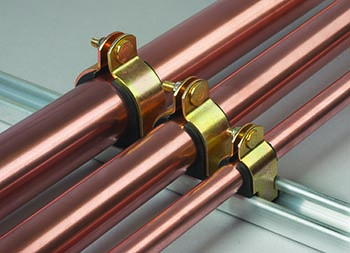 MANY INVENTIONS THAT have the greatest impact on everyday life are deceptively simple. Auburn Hills-based Hydra-Zorb’s cushion clamp could be considered one of those breakthroughs.

The device (also called Hydra-Zorb) was created more than 50 years ago by the late Orval Opperthauser of Ortonville while he was working at F. Joseph Lamb Co., a Detroit-based supplier of machine tools to the automotive industry. Opperthauser was tasked with figuring a way to stop hydraulic lines attached to a piece of transfer equipment from vibrating and chattering.

Within a day, he developed a large clamp and molded a piece of plastic to go around the metal to absorb any shock. The cushion clamp could be installed right on the hydraulic lines without having to tear down equipment.

Robert Dodge, Opperthauser’s stepson and current president of the 27-employee company, says once the cushion clamp made its way into the refrigeration industry, it was “off to the races.” Clients now include grocery outlets nationwide, Target, and institutions such as the University of Michigan in Ann Arbor, among others.

He says the product is made entirely in the United States, and large orders that would take some suppliers months to complete can be turned around within a matter of days. “Our product is guaranteed, it’s spot-on, and we get it out the door,” he says. “I mold everything out in the shop. I weld it, I stamp it, I package it — it’s all (done) here.”

To keep pace with demand, Hydra-Zorb will double its footprint in March at a new, 52,000-square-foot facility, also in Auburn Hills, and Dodge says he plans to add five employees over the next year.

Dodge attributes his company’s success to keeping a narrow focus and maintaining good customer service practices. “We don’t throw everything at the wall,” he says. “Our breadth of product is narrow, and the depth is long.”