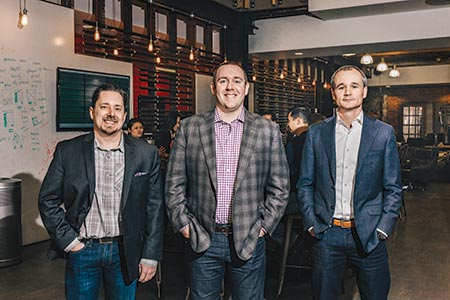 Rapid technology gains mean mobile app builders and apprentices never have a chance to rest on their laurels. At the same time, constant upgrades to mobile platform systems by Apple or Android allow app builders like Detroit Labs to re-engage with their clients.

The company, founded in 2011 in downtown Detroit, has built apps for more than 100 clients, but the projects are often short-lived, lasting around three months on average. Normally, such a quick turnaround would require a strong business development team to deliver a steady pipeline of new clients.

“On the one hand, when we have an active project, there can be four to five people working on it, and sometimes there’s upward of 16 clients involved if it’s a large (promotional campaign),” says Dan Ward, a co-founder of Detroit Labs. “The earlier you can get (the app) into the customer’s hands, the sooner you can improve on it before it goes live.

“Once a project is done, we’re fortunate to have another app to work on. But on the other hand, if Apple updates the iOS (mobile operating system), we work with our past clients to get their apps updated, and that gives us another opportunity to see what they’re working on and (find out whether) they have another project we can bid on.”

Given the nature of mobile app development, flexibility is a key attribute. “When we’re midstream on a project, the iOS might update again,” Ward says. “We know it’s coming and can prepare for it, but it’s not like we’re here building a uniform product that will never undergo any changes once everything is signed off.”

Change seems to be the company’s motto. Over the last four years, Detroit Labs has moved four times — twice within the same building, followed by a relocation to the Madison Building overlooking Grand Circus Park before their most recent move to a historic structure along Woodward Avenue in the city.

One of the nation’s first app developers, the company’s client roster reads like a who’s who of the corporate world — Chevrolet, Stryker, Domino’s Pizza, Quicken Loans, and DTE Energy. The projects, ranging from customer
engagement apps to marketing campaigns, often start with a mobile strategy.

“We want to know what the client is looking to accomplish, how they want it distributed (iPhone, iPad, Android, or vehicle apps), and then we come up with a design so there’s a compelling, seamless user experience,” says Paul Glomski, co-founder and CEO. “Once we get a game plan set, we make it happen. And we can change things on the fly, if need be.”

Most recently, the company built a maintenance reporting app for Quicken Loans called qPOP!. While previously, employees had to call or send an email to place building repair orders, the new app allows workers to quickly and easily submit repair needs and make replacement requests from a smartphone.

The app is pre-loaded with common maintenance requests such as the replacement of burned-out light bulbs, temperature adjustments, office supply inquiries, furniture repairs, and more. It is also optimized to work with Bluetooth, making it possible to determine where employees are located when making a request through the app.

“Our goal was to have a simplified design so (our workers) could submit job tickets in the most streamlined, efficient manner possible,” says Melissa Price, Quicken Loans’ director of facilities and business office. The project was one of several Detroit Labs has designed and implemented for the Quicken Loan family of companies.

“Repeat business, new business, we love it all,” Ward says. “But we’re not afraid to step into a new direction. In fact, we’re looking at developing a wearable project right now. We’re open to anything, as long as we’re passionate about it.” db