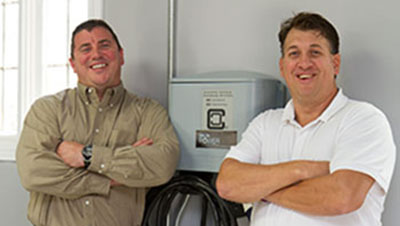 After filling several dozen skilled trade positions in the electric vehicle industry, Brad McKouen, top left, and Jeremy Smith took the next logical step — they used their staffing expertise to organize and certify a network of more than 1,400 electricians in the United States and Canada to install electric charging stations.

“You couldn’t have customers calling up Charlie the electrician and asking him to install a charging station when he’s never done it before,” says McKouen, principal of Delta Power Systems and Delta Staffing, both in Clarkston. “We saw an opportunity to standardize an industry, so we started hitting the phones. We’re recruiters; that’s what we do.”

Most recently, Delta Power Systems signed a deal to install charging stations for customers who purchase a $100,000 Fisker Karma plug-in hybrid sports sedan, among other electric vehicles. “We installed a charging station at Mr. Fisker’s home (Henrik Fisker is founder and chairman of Fisker Automotive in Anaheim, Calif.),” McKouen says. “Right now, we’re building up a database of all the charging stations installed in the U.S. and Canada, which we will use to further grow the industry.”

Although electric car sales have been slow to date — the Electric Drive Transportation Association reports 286,371 hybrid and electric vehicles were sold in 2011, accounting for 2.3 percent of the U.S. market — most experts believe better days are ahead. Greater convenience and more stringent CAFE standards, scheduled to be implemented in 2025, are expected to drive electric vehicle sales.

“We’ve installed more than 100 charging stations, 60 percent for businesses and 40 percent at homes,” Smith says. “Quite a few people are getting them at both places.”

To build its database and promote the installation of charging stations, Delta Power turned to Aqaba Technologies, a digital advertising agency in Sterling Heights. The company built a website, called www.installmycharger.com, where users fill out a request for a charging station and schedule an appointment. At the same time, the customer is added to the database.

“One interesting trend is that we’re attracting a very green audience that tends to be in pockets, almost like little ponds,” says Ramsey Sweis, Aqaba’s president. “So we go from one pond to the next and look at ways we can gain more customers who might own or buy an electric bike, motorcycle, or boat. We also follow up with people who have had charging stations installed, to make sure everything was to their satisfaction.” db