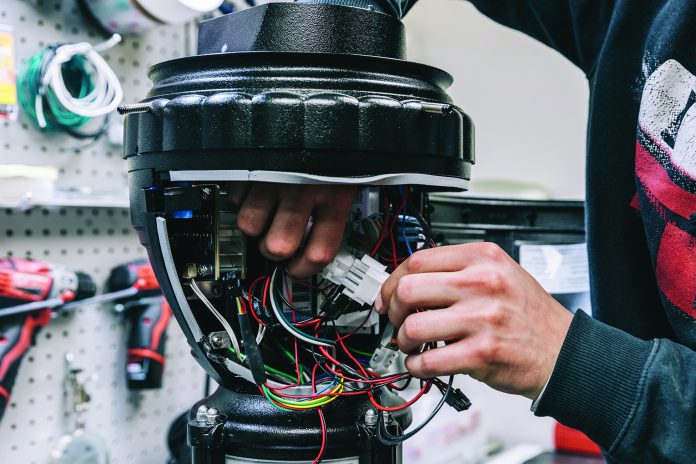 Operating on 12 volts, the smart “Intellistreets” system, made up of multifaceted light poles developed by Illuminating Concepts in Farmington Hills, packs a lot of power.

Consider that in extreme weather conditions, such as a hurricane, the connected light poles can provide early warning alerts via a system of speakers and LED signs (digital banners) to direct people to evacuation routes, food and water sources, and shelters.

There’s also a call button hard-wired to a cellular network, which immediately notifies personnel at emergency response centers. With several yards of range, people being attacked or reporting an incident can remain in contact with the operator while he or she notifies public safety authorities to the exact location of the alert.

“We can add a battery to the light pole or install a solar panel so (the applications) still work if the electrical grid goes down,” says Ron Harwood, founder and president of Illuminating Concepts. “We can offer the entire light pole in multiple styles, or we can provide a module that can be attached atop current light poles that includes a speaker, a camera with a fisheye lens, and sensors, and we can install the call button lower on the pole.”

The sensors, available on a new or a retrofitted pole, offer a range of data including barometric pressure, wind velocity, air quality, and temperatures — even the presence of explosive materials in the near vicinity. The Intellistreets system can perform facial and infrared recognition, and provide an Amber Alert, as well.

“Each light pole can be connected to a central control system, so you could play Frank Sinatra over the speakers, arrange for different colors of light, or it can be used to alert people to move their cars because a snow plow will be coming by in 30 minutes,” says Anthony Reale, director of industrial design at Illuminating Concepts. “And everything is made and sourced in Michigan.”

Locally, Intellistreets systems have been installed in Auburn Hills, Detroit, Dearborn, Royal Oak, Lansing, and other cities, while across the globe the company’s customers include facilities and places in Las Vegas, Missouri, London, and Barcelona.

Illuminating Concepts, which got its start in 1981, has designed hundreds of lighting projects for retail, urban, and entertainment districts, including Comerica Park, Ford Field, and Little Caesars Arena. Other clients include Disney, Warner Bros., NBC, and the Nasdaq.

“You don’t need to rip up the streets to install Intelli-streets because it’s a wireless system, and we even design small, attractive cellular towers to enhance areas where lots of people are using their smartphones,” Harwood says. “The system can also notify central command if someone is trying to hack into the system.”