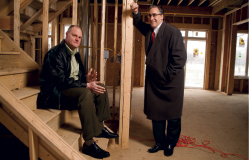 After residential-building permits began falling in 2004, Steve Friedman saw an opportunity. A year later, the 30-year veteran founded Pinnacle Homes in Farmington Hills with the sole purpose of buying subdivisions that had reverted to lenders because of rising loan defaults. But Friedman’s plan had to be modified midstream.

“At first, I thought we could build some homes and sell the raw land to other builders,” he says. “But the market shifted, so we became both a developer and a builder.”

Last year, Pinnacle sold 40 homes, and is on track to sell around 100 homes this year, says Howard Fingeroot, Pinnacle’s managing partner and a former executive with Pulte Homes Inc. in Bloomfield Hills. “Because we’re getting land at 25 to 50 cents on the dollar [from lenders], we can offer people the exact same home in Northville Township that sold for $500,000 five years ago for $350,000 today.”

While buyers aren’t necessarily lining up in droves to buy the company’s houses — most often, because existing homes are going at discounted prices — Friedman says there’s a growing market of smart, sophisticated buyers who smell a deal. “People are figuring out that while they may have to sell their existing home for less money, they’ll be saving on the new home, as well,” he says.

With eight subdivisions in the region, and four more coming online shortly, Pinnacle Homes is also looking at opportunities elsewhere, having opened an office last year in Washington, D.C. to oversee condominium conversions while scouting for projects in Charleston, S.C.

An initial investor of ePrize, a fast-growing interactive promotions company in Pleasant Ridge, Friedman says the residential housing market in metro Detroit won’t rebound overnight. “The recovery will be slow and gradual,” he says. “As we sell more homes, the market will turn a bit and more people will take notice. Like most people, we’re patient, long-term investors.”