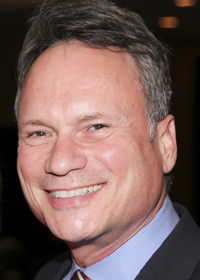 MC: In Atlanta. I’m attending the Rotary International Convention, which is an annual event held in a different city every year. There are more than 40,000 people here from 200 countries.

DB: Has the mission of Rotary changed?

MC: We’re closing in on the eradication of polio. It’s only the second time in history that a disease has been kicked off the planet, with the first being smallpox. Bill Gates has continued his two-to-one pledge (of matching contributions). He’s a great partner, and he spoke here — as did Jack Nicklaus, who is a polio survivor. In addition, Ashton Kutcher was here, and he was part of a panel called Modern Day Slavery, which involves the sex trade. It’s a bigger problem than anyone realizes. A fourth speaker was Bernice King, the youngest daughter of Martin Luther King Jr. She provided a history of the King family. One of the six areas of focus for the Rotary is peace, and she was a natural here.

MC: I celebrate my 20th year with Rotary this year, and I’m a District Governor of District 6380, which looks after 52 clubs in southeastern Michigan and part of Ontario. That’s a total of 1,700 Rotarians, and there are 535 District Governors in the world. We rotate leadership every year. As for business, no one joins a Rotary club to promote his or her company. But if you do it right and play to your strengths to help the Rotary, there are benefits that come to your business from fellow Rotarians who naturally want to reach out and help a fellow Rotarian. It’s a nice overlap between giving and working.

DB: What are your goals this year?

MC: We’re improving our communication channels by using more technology. We’re finding we’re attracting younger members. This year, we moved more of our meetings to video meetings. It’s been a good way to better highlight our value proposition, as more people can devote an hour to the Rotary without leaving the office.