Revenue at each of Detroit’s three casinos took an unusual turn in 2015 compared with recent years. While an increase of 3.3 percent in total revenue isn’t quite a surge, it does represent the first reversal of the three casinos’ revenue decline since 2011.

All three shared in the upswing. As reported by the Michigan Gaming Control Board in January, MGM Grand Detroit recorded $582 million in 2015, an increase of 3.7 percent compared with 2014; MotorCity Casino revenue totaled $464.5 million, or 4.4 percent better than the previous year; and Greektown Casino- Hotel’s revenue rose 1 percent to $329.9 million.

Before anyone gets too excited, though, a few things are worth recognizing. For one thing, the winter season in 2015 was appreciably better than 2014, when the region experienced unusually cold weather highlighted by the Polar Vortex (-14 degrees). But even adjusting for the weather, overall revenue bounced back strongly enough to suggest at least a stabilization — if not a resurgence — of an industry on which the city relies heavily for tax revenue.

While all three casinos can point to improvements they’ve made to help draw new business, they acknowledge that, to some degree, the most important factor is outside of their control: The casinos thrive when downtown Detroit is vibrant and attracting people from throughout the region and outstate on a regular basis. And that, in the city’s post-bankruptcy era, may well be the thing that keeps the casinos prosperous for the foreseeable future. 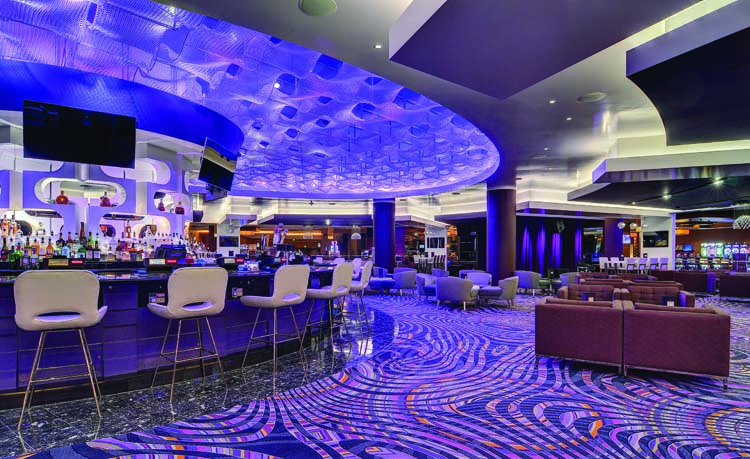 To that end, several factors now appear to be working in the casinos’ favor, including some that might appear at first glance to represent competition. The recently completed $279-million renovation and expansion of Cobo Center opens up much larger banquet and convention space than any of the casinos offer. And the burgeoning District Detroit project will not only provide a new home for the Detroit Red Wings, but will offer a great many new destinations for those who visit from the suburbs or outside the region.

Casino executives believe their success is driven more than anything by the vibrancy of downtown Detroit — and that means anything that draws a crowd. “All of us are extremely competitive,” says Steve Zanella, CEO of MGM Grand Detroit, “but let’s do everything we can to get the business here first, and then compete for the business.”

Jason Gregorec, CEO and general manager of Greektown Casino-Hotel, agrees. “Any time there’s new development or new venues, it’s a win-win all the way around,” Gregorec says, “because our goal is really to develop Detroit and especially the downtown area.”

Cobo’s renovation and expansion, completed last year, appears to be a particular case of “competition” that helps more than it hurts. With more than 720,000 square feet of convention and banquet space, along with more than 100 meeting rooms, Cobo can accommodate far more — and far larger — gatherings than the three casinos combined.

“Cobo is another tool to get those bigger types of events here,” Zanella says. “If the city wasn’t going through the transformation it’s going through now, it would be a lot more questionable (to renovate and expand Cobo) if you’re just stagnant and you’re redoing the hall. But you don’t have that high level of concern now, with the (city’s successful) bankruptcy (exit) and what’s going to happen.”

When a major event comes to Cobo, Zanella says his team doesn’t lament that it didn’t go to MGM. Rather, it focuses on the opportunity to fill hotel rooms and restaurants. Greektown and MotorCity take the same view.

“More people are coming downtown, and that increases our business,” Gregorec says. “They’re saying, ‘Let’s see what our other options (for entertainment and lodging) are.’ And it also increases our room rate. We were over 90 percent occupancy last year, and we were in the high 80s (in 2014), so it’s been creeping up.”

According to Gregg Solomon, CEO of MotorCity Casino, the Cobo expansion presents an opportunity — but the benefits may lag because of the lead time event planners usually require.

“If you’re an event planner and Detroit is in bankruptcy, you’re trying to plan an event that’s three to five years out,” Solomon says. “So it’s only now that serious event planners for large business events are considering Detroit. That’s what we refer to as the booking window. There are events being booked now that will be very important to us as they’re coming on line just as District Detroit is coming to fruition.”

The Ilitch-driven District Detroit project has an even greater potential to impact the vitality of downtown. The project calls for a 50-block area of downtown and Midtown to be redeveloped, highlighted by the addition of a 20,000-seat arena for the Red Wings at the northwest corner of I-75 and Woodward (to be completed in late summer 2017). The arena is projected to host more than 200 events a year.

In addition to the arena, the district will include an upscale hotel on Woodward, various new retail and commercial developments, single- and multifamily developments within walking distance of the arena, and a new corporate headquarters for Little Caesar Enterprises Inc.

District Detroit is designed to generate foot traffic in the broader downtown area, which will offer multiple benefits for original and existing establishments outside the project area. That would include the three casinos — especially MotorCity Casino, given its location is just a few blocks west of the planned arena at the Lodge Freeway and Grand River Avenue. 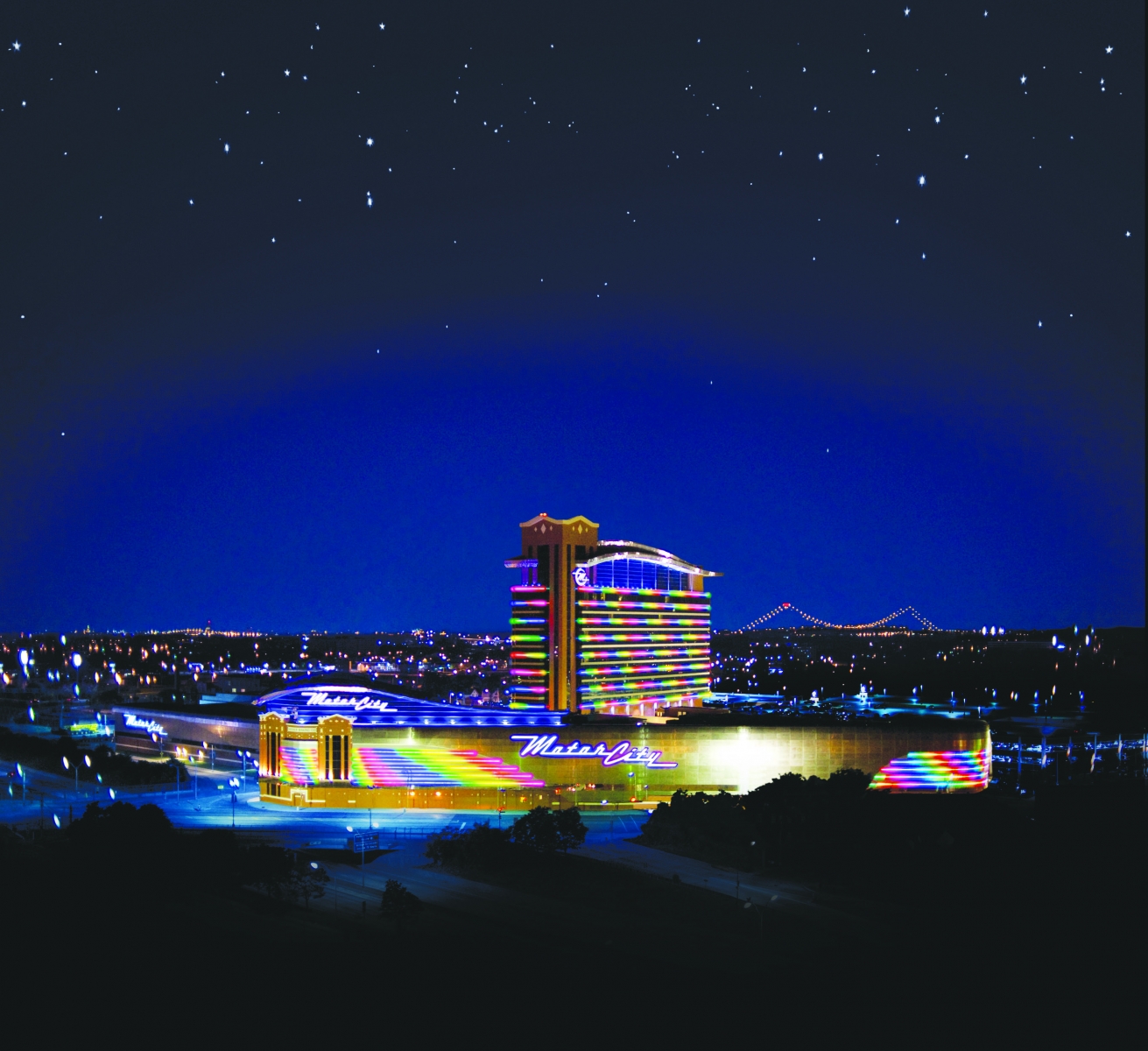 MotorCity Casino may have an advantage with its location near the new District Detroit development that includes a new arena for the Red Wings.

Solomon clearly sees the opportunity, but emphasizes that MotorCity has to be ready for it. “It could be the largest negative impact or the largest positive impact,” Solomon says. “We have to make sure that MotorCity prepares itself for 200-plus events or more a year that are putting 20,000 people (per event) in our district, and the ramifications of parking ingress and egress and other things. The positive side, of course, is (that you’ll have) a couple of thousand additional (people) at your front door.”

While MotorCity enjoys close proximity to District Detroit, the other casinos are planning to aggressively market their entertainment and dining offerings. “It’s no secret that MotorCity’s a little closer,” Zanella says, “but we think, just like when you come in for games now at The Joe or Ford Field or Comerica Park, you come here for the pre-game, go to the game, and come here for the post-game.”

Greektown feels the same way. “Everything serves a different purpose,” Gregorec says. District Detroit will be “great, but it’s also going to bring people to the larger downtown area, and to us we want downtown Detroit to be top (on their) mind, so people are saying, ‘Let’s go downtown. Let’s go look at that area.’ We want more options for people to be able to go downtown.”

Jake Miklojcik, president of Lansing-based Michigan Consultants and a longtime observer of the Detroit casino market, sees District Detroit having a positive impact on the casinos — but maybe not as much as people might hope, considering that the Red Wings only play about 40 regular-season home games, along with the potential for additional games during the post-season.

“The idea that you could have a lot more people doing other things in town because of the new Red Wings location, I think that’s a limited argument,” Miklojcik says. “There’s more money going in, there’s construction, so the suites will be nice — but if you could bring the Pistons downtown, then you’d have another 40 nights plus.”

The Ilitch family says they plan to host many more events at the new arena over what is held at Joe Louis, where there are limited parking offerings and the Ilitch organization shares concession revenue with the city. At the new venue, the family will control nearly every revenue source, which will provide for richer contracts when booking top-flight entertainment.

Miklojcik agrees with the basic idea that a more vibrant downtown helps all three casinos, although he isn’t sure the proposition always works in such a direct way. “Greektown always wondered whether or not Tigers games really help them because of the parking issues and the regular (casino) players being less likely to come,” Miklojcik says. “But sure, there’s a synergy and there’s excitement.”

To the extent that the viability of the casinos owes to the regular players — not the folks booking a huge party night, but the ones who will come down on Wednesday afternoon on a regular basis — Miklojcik believes some of this year’s boost owes to better economic conditions for that group. “Gas prices are lower, the economy’s better,” he says. “They’ve got more disposable income.”

While Greektown saw the smallest revenue increase of the three casinos, it also invested the most in improvements — particularly in its hotel. The upgrades include new 2,000-thread-count sheets, raised casino ceilings, new LED lighting, and even new chandeliers. The biggest advancement was to the facility’s heating and cooling system, which the new owners acknowledge was substandard when they bought Greektown out of bankruptcy in 2014. 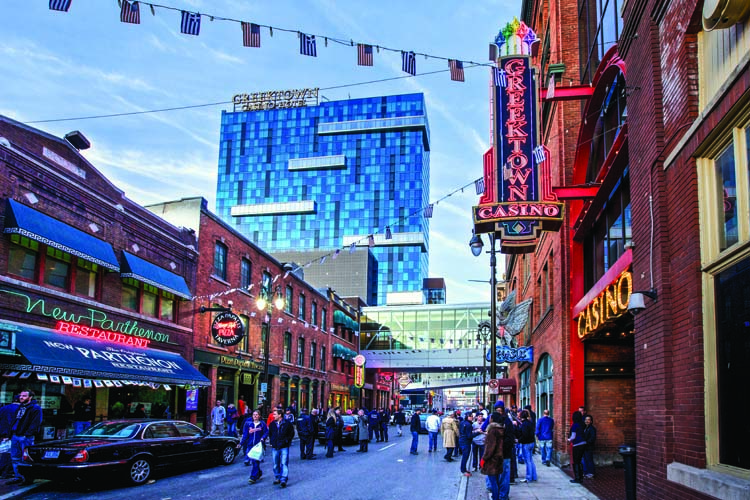 Gregorec, who took over as Greektown CEO in September after joining parent company Rock Ventures in June, believes the investments should pay off nicely in the future. “It’s a whole new feel,” he says. “We had year-over-year growth with significant construction, and (providing) the absolute best guest service in a clean, fun, safe environment and (being) a great addition to the city and how it’s developing is a vital piece of that.”

Gregorec joined Rock after a career that started in Chicagoland at the Trump Casino and the Majestic Star, before he became general manager of the Tropicana Evansville. He says he was attracted by Rock owner Dan Gilbert’s vision of how Detroit’s resurgence can proceed.

“Greektown, unfortunately, was starved for cash and capital, and they were kind of limited in what they could do,” Gregorec says. “The team didn’t have the tools to be successful, so Dan was able to provide them with the tools and the support. It’s a great team. They just needed the tools.”

Of course, Gilbert doesn’t invest in any property with the idea that he will have to continue to pour capital into it over the long term, and Gregorec knows that. Making Greektown sustainable over the long term, he says, means
creating an experience in which guests believe they had a worthwhile time even if they didn’t win anything. “It’s not about the gambling,” Gregorec says. “It’s about the entertainment.”

Similarly, Zanella thinks MGM has benefited the most from investing in its hotel rooms and restaurants in recent years. “Where we’re seeing growth is in our non-gaming amenities,” Zanella says. “That’s why we added the (high-end music lounge) AXIS, and the Tap (sports bar) has proven to be a great place for people to come and enjoy sports.”

“One of the things we worked very hard at was that if you chose to come downtown and participate in all the things that MotorCity had to offer, if gaming wasn’t something you wanted to do, you didn’t have to see one element of the casino operation and it was 100 percent family-friendly,” Solomon says.

As the market for Detroit’s casinos continues to show itself as mature, and as options like online and convenience gaming become easier to access, all three operators recognize they’re not going to grow simply by looking for new people to sell on gaming. Their long-term vitality is going to depend on the quality of their full package of offerings — but, even more importantly, on the viability of downtown Detroit.