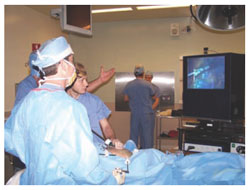 For the first time in medical history, hundreds of doctors around the world may soon be free of some age-old obstacles in the operating room. Unencumbered by bulky goggles, headsets, and other such impediments, cutting-edge surgeons are now poised to reap the benefits of real-time holography.

The vast majority of surgical-imaging systems today, often used in routine cardiac and urological procedures, are either two-dimensional or require unwieldy 3-D equipment to operate. But with new imaging technology from Livonia-based Absolute Imaging, doctors are no longer burdened by 3-D glasses. Instead, they can simply look into Absolute’s screen and immediately see a holographic image created by tiny cameras inside the patient.

The new imaging system, called LifeVision, is compatible with all types of stereoscopic surgical cameras used for endoscopy and laparoscopy.

The technology, which will be made commercially available later this year, breaks with the traditional means of holography. Using a series of lenses, grates, and prisms, the LifeVision device forms a solid-appearing image of the surgical site suspended in virtual space.

Absolute Imaging is currently working with various companies on licensing LifeVision for integration into their respective medical technologies.

“Approximately two-thirds of all surgeries performed today still use a more traditional open approach, and most of today’s laparoscopic and endoscopic surgeries are viewed on a flat, two-dimensional, high-definition display,” says Richard Kughn, co-founder of Absolute Imaging and a former executive at Taubman Centers Inc. in Bloomfield Hills. “We believe the added comfort and realism provided by [LifeVision] will make it easier for a surgeon to consider [minimally invasive surgery].”