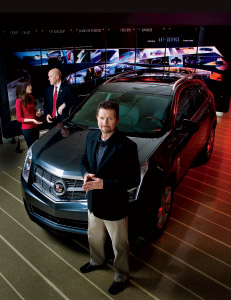 For the better part of the 20th century, one of the most storied brand names in the auto industry, Cadillac, was synonymous with quality and luxury. But a stretch of uninspired design and marginal innovation opened the door to German and Japanese rivals, and threatened to erase decades of technical and styling prowess.

By the end of 1998, Cadillac sales had fallen to fewer than 200,000 units in the United States, and between 10,000 and 12,000 abroad. “We were at a fork in the road,” says Cadillac global design director Clay Dean, referring to the brand’s attempts at rebuilding. “There was a new level of competitiveness out there, and we dropped the ball. You can look at a lot of elements that conspired together: government challenges, a bit of arrogance, and a loss of focus.”

Cadillac’s mantra has since changed. Gone is the rudderless drift of a former champ, and in its place is a new approach to designing and building cars called “art and science.” In essence, GM primed the public with a new design concept of clean lines and plane surfaces while incorporating traditional Caddie signatures, like vertical tail lights and dominant sail panels.

Leading the resurgence is the CTS, now a design template for the entire product line. It will soon have a more powerful cousin, called the CTS-V, a 556-horsepower stallion that’s aiming to compete with BMW and Mercedes Benz.

Another introduction, slated for release next spring, will be the CTS Sport Wagon, Cadillac’s first “station wagon,” which will compete with European luxury wagons made by BMW and Audi. The wagon, also based on the CTS design, made its premiere last August at Pebble Beach, Calif., and will be a headliner for the company at this January’s auto show.

Cadillac’s other hot product, the crossover SRX, received a makeover for its second-generation debut. With more cabin room and a “fresh iteration of Cadillac’s signature design language,” the new SRX will also be in dealer showrooms by mid-2009.