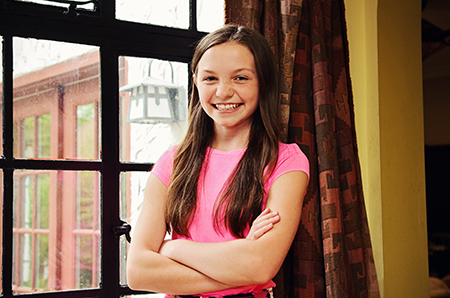 Alyssa Reiter is on her way to becoming a successful entrepreneur — and she just finished the sixth grade. Alyssa’s idea for the “next-best thing” recently cleared approval from the U.S. Patent Office. She designed and created a prototype, and has advertising slogans in the works.

Now, with the help of her parents, the Detroit Country Day student is preparing to shop her interactive game for pet hamsters to toy manufacturers. Alyssa says her inspiration for the game came when she was playing with her pet hamster, Colby. She put the animal in a clear plastic ball used for exercise and watched as Colby rolled toward some “chew sticks.”

A promising artist, Alyssa, 13, drew up some designs and, using cardboard and felt, fashioned a shoe-sized box where one side opens up and unfolds to become a small bowling lane — complete with small, rubber bumpers, chew sticks for pins, and score sheets. “It’s a one-package idea — everything fits into it,” says her mother, Susan Reiter.

Alyssa’s creativity and entrepreneurism have already been recognized in the business industry. She was among more than a dozen featured presenters at the recent World Intellectual Property Day at TechShop Detroit. For her efforts, Alyssa has been recognized as Young CEO of the Year by DBusiness magazine.

One benefit of the game is clear: it provides the required daily exercise for hamsters. Her parents aren’t surprised by their daughter’s pet project. “Alyssa has had a sense of originality and creativity from a very young age,” Susan Reiter says. “As for this project, it’s just plain fun. It’s hard to say hamster bowling without smiling.”

Alyssa, who loves all types of animals, has a dog, a bunny, and a frog, and has owned five hamsters — including her current one, Cottonball. On a related front, Alyssa started volunteering at the Dearborn Animal Shelter and, with a friend, is making bracelets to be sold at a concession stand to raise money for the shelter. As for her future plans? “I want to become a vet or do something having to do with animals,” she says.