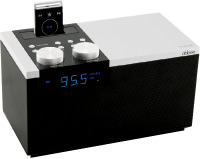 Two years ago, when he applied for startup funding from the state of Michigan, Jake Sigal was met with resistance from administrators unable to understand his products or his business model. “No one would finance us,” he says. “They told us we would fail or that we weren’t creating enough jobs.”

Undaunted, Sigal, 28, worked without a salary for a year and took out a second mortgage to get his fledgling business off the ground. An inventor and former product-marketing manager for the XM Radio division of Delphi Corp. in Troy, Sigal developed a one-step, vinyl-to-computer converter kit called the ION Audio USB Turntable. Today, the consumer audio company that Sigal started in his guest bedroom, Ferndale-based Myine Electronics, is set to record $5 million in annual revenue.

Knowing that Apple has a strong grip on young consumers, Sigal saw an untapped market for listeners 45 and older who wanted more control over the content and variety of their favorite radio stations. “Older consumers will likely never buy an MP3 player because they can’t figure out how to use it,” Sigal says. “But they will buy a similar product if it’s simple to use and looks retro.”

Last January, Sigal launched Ira, a Wi-Fi Internet radio that streams more than 11,000 stations from around the world. Its free content is broadcast over the Internet by radio stations and aggregated by Myine’s software. “It’s designed to function straight out of the box,” Sigal says. “You don’t even need a computer.” Once the device is plugged into a wireless Internet router, radio stations can be selected by genre, name, or location. Ira can also be attached to any audio system, such as a boom box or a home theater.

Now available on Amazon.com, Npr.org, and Myine.com for around $150, Ira may be found in Michigan-based consumer-electronics stores in time for the holidays, as well.

In addition to Ira, Myine is preparing a hybrid clock-radio-MP3 player called the Abbee. Like TiVo, the Abbee records preferred radio stations to an internal hard drive — free of DJ chatter and advertisements. A portable MP3-like player mounted on top of the Abbee copies the songs automatically.

Entirely self-programming and easy to use, the $250 device is designed for people who aren’t interested in learning how to use a computer interface like iTunes.

“My mom uses an iPod Shuffle,” Sigal says, “but she still listens to the same 50 songs I loaded on for her four years ago.”

With no screen and large, tactile buttons, the Abbee is the first portable audio player suitable for use by the visually challenged.

Sigal says he was emboldened by the initial skepticism he faced. At the annual Consumer Electronics Show in Las Vegas last January, the Abbee won a spot in the Top 25 Gadgets list, beating out thousands of other inventions. “Being at CES was great,” says Sigal, who now has 10 employees and is looking to add more. “People recognized our hard work and effort. Thinking differently — outside of the box — pays. They all got it; sometimes simpler is better.”