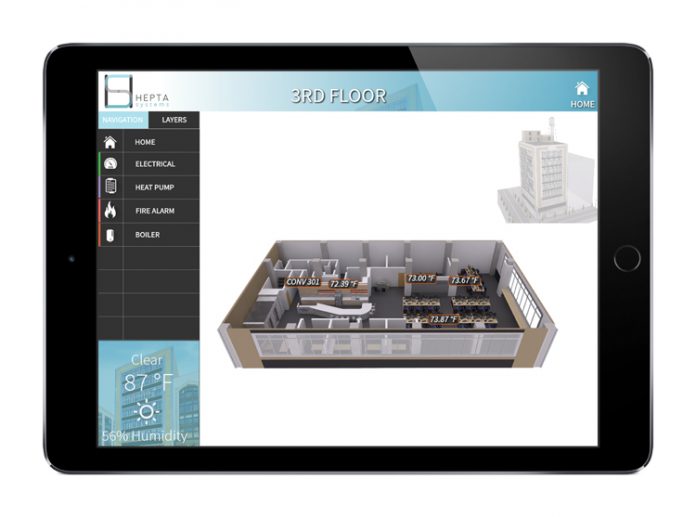 Smart buildings, where property managers can access, monitor, and adjust mechanical systems using a smartphone or a tablet, are taking another technological leap. By wiring multiple structures, business and civic leaders can create smart cities.

>> get smart Hepta Control Systems in Detroit is connecting multiple buildings via common sensors to save on energy and boost efficiency.

“When buildings were automated a few years back, electronic sensors and other digital equipment allowed a person to remotely control lights, interior temperatures, or security alarms,” says Jason Houck, chief information officer at Hepta Control Systems in Detroit. “Now, with new technology, we can connect dozens of buildings. If there was a parade down Woodward Avenue — if, say, the Detroit Lions won the Super Bowl — we could change the lights on the buildings and choreograph the colors.”

Taking it further, Houck says the technology the company is beginning to install can determine the source of power a building is drawing from, whether it’s coal, natural gas, wind, solar, or nuclear. With the added intelligence, Hepta plans to offer its clients the ability to generate carbon credits that can be sold to commercial and individual customers at a profit.

“Using latitude and longitude location points, you can determine if you’re using a lot of power from a coal plant on a given day,” Houck says. “From there, you could lower your energy use and, in effect, generate carbon credits. It’s another way you could generate revenue by being more green.”

Other new offerings in building automation include the ability to remotely control door locks and lights, complemented by video cameras, so a property manager could virtually show a prospect available office or retail space without physically being on-site. “You can even talk to the prospect while they’re taking the tour,” says Etrit Demaj, Hepta’s COO.

With clients that include Bedrock Real Estate Services, Wayne State University, and the College for Creative Studies, among others, Houck and Demaj say the concept of a smart city is starting to take shape. Bedrock, an affiliate of Quicken Loans Inc., owns more than 70 buildings in Detroit’s central business district.

Hepta got its start in 1993 when Houck’s father, Ted, and a friend, launched a mechanical refrigeration business. When his partner passed away, Ted, CEO of Hepta Control Systems, sold the company to pay off his partner’s family. From there, he began to focus on building control systems.

“We have a long track record in intelligent buildings, and we’re only scratching the surface of what’s coming,” Jason says. “We just opened an office in North Carolina, so we’re looking to expand nationally. The more smart cities, the better.”