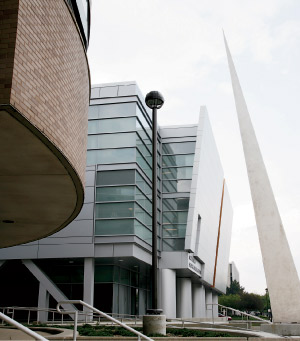 With the recent introduction of a $28-million engineering development center, Wayne State University in Detroit is forming a consortium of local hospitals to create the next generation of medical devices. The effort will include microscopic sensors that better detect cancer cells, improve vision, and monitor neurological diseases. Other sensors detect water pollutants or are used in robotic applications.

“We had 100 faculty, students, scientists, and engineers spread at labs throughout our campus, so the new facility allows us to concentrate a number of disciplines, boost our efficiency, and take on new research,” says Gregory W. Auner, professor and director of electrical and computer engineering at Wayne State.

In one application, university scientists are perfecting an ultrasound device that detects and treats cancer without the need for surgery. An earlier version of the application is currently being used at the Karmanos Cancer Institute in Detroit. Further research is being planned with the Oak Ridge National Laboratory in Tennessee, which has the world’s most advanced supercomputer.