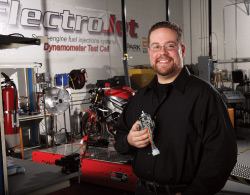 Tougher emissions laws will eventually help hybrid vehicle sales, but people like Kyle Schwulst aren’t waiting for regulations to dictate market conditions. A former Ford engineer, Schwulst, 29, has developed an electronic fuel-injection system for one- and two-cylinder engines that reduces harmful emissions by up to 65 percent while boosting fuel efficiency by 12 percent.

While the company isn’t a household name just yet, it is creating plenty of buzz in emerging markets such as China and India, where more than 30 million motorcycles are sold each year — accounting for roughly 75 percent of the global market. “Motorcycles, ATVs, other recreational products, generators, lawnmowers, and other small-engine products are our target market,” says Schwulst, founder and CEO of ElectroJet Inc.

Founded in a Whitmore Lake pole barn in 2003, ElectroJet now operates out of a large research facility in Brighton. The company forecasts sales of half a million of its business-card-sized injection systems this year, which could generate up to $50 million in revenue and create dozens of jobs.

While the majority of gas-powered engines require a minimum of five sensors to control fuel and engine speeds, ElectroJet’s system uses just one sensor to obtain five strings of data. As a result, the device reduces carbon-monoxide emissions by up to 65 percent and nitrous oxide emissions by up to 35 percent. In turn, the $50 component can be easily attached to existing engines, making it an ideal product for developing countries.

With lower salaries, less developed roads, and growing pollution problems, motorcycles and scooters are used as general transportation by a large percentage of Chinese and Indian citizens. While automobile sales are increasing in those countries, their growing population base and still relatively low standard of living make motorcycles an affordable transportation option.

Another reason for ElectroJet’s growth in Asia is the institution of tougher emissions regulations, Schwulst says. China is adopting stricter emissions laws this year; India is following suit in 2010.

Closer to home, the White House plans to impose tougher emissions laws, a move that would help drive ElectroJet’s demand.