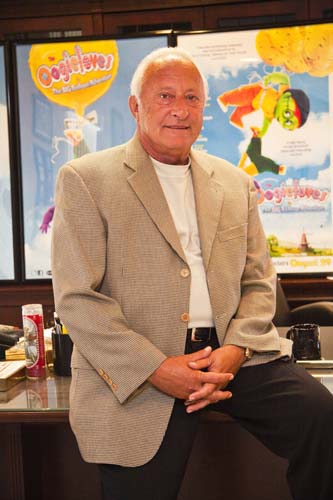 It’s not every day that a first-time executive producer invests $33 million to create and promote a movie featuring characters with names like Goobie, Toofie, and Zoozie. However, for Mike Chirco, president and owner of MJC Cos. in Macomb Township, one of the state’s largest homebuilders, the move made perfect sense.

The film, The Oogieloves in the Big Balloon Adventure, shot entirely in Michigan, made its debut on August 29, just in time for the Labor Day weekend. The storyline, aimed at preschoolers, finds Goobie, Toofie, and Zoozie trying to retrieve five magical balloons that floated away just before a surprise birthday party for their friend, Schluufy.

“It’s a children’s musical where the kids sing, and get up and dance, based on what’s happening on the screen,” Chirco says. “I was one of the original investors, and it was a case where I was so far in, I had to spend my way to get out.”

The multimillion-dollar budget is an eye-opener — but first, a little history. In 2003, Chirco and several partners invested in a kid’s show called Bed Bugs, which appeared locally on PBS. The goal was to take it national. “The show had a lot of potential,” says Chirco, who last year built 250 homes. “I didn’t understand why it didn’t go national. Through a friend, I met with children’s producer Kenn Viselman, who did Teletubbies, Thomas the Tank Engine, and Eloise, and he saw it as a movie.”

Viselman suggested an immediate name change; hence, Bed Bugs became Oogieloves. He also advised Chirco to buy out his partners and secure all rights to the project. “I was on board,” Chirco says. “Kenn helped generate $12 billion in merchandising for the Teletubbies and (characters in) his other films, so I got him to sign on as a producer.”

Next on the agenda was lining up stars for the live-action film, including Toni Braxton, Jaime Pressly, and Christopher Lloyd. A team also was assigned to scout locations — one scene was shot at Oakland County International Airport in Waterford, where a balloon is found on the tail of Toni Braxton’s plane (she plays Rosalie Rosebud). Another balloon is stuck on top of a windmill in Holland — so naturally, the Oogieloves ride a fast-growing beanstalk to retrieve it.

The hijinks were inexpensive by Hollywood standards: Chirco invested $12 million into the film, minus $4 million he received in Michigan film tax credits. Distribution was an entirely more expensive proposition — $25 million. “A good movie will cost $10,000 per screen to market, so we’ll be in 2,500 screens,” Chirco says.

If the film is successful, Chirco plans one or two sequels. He also hopes to cash in on merchandise sales. “If the movie doesn’t do well, I still have my homebuilding business,” he says. db