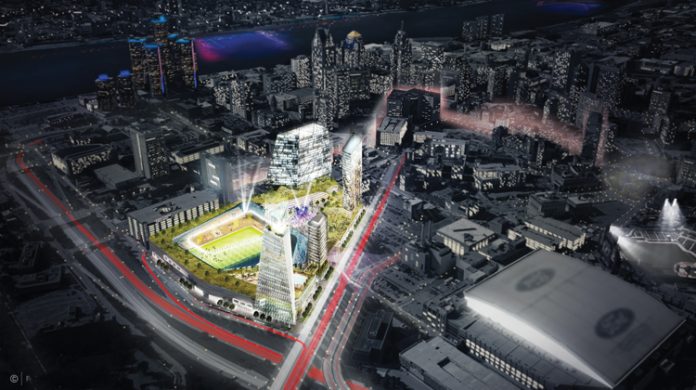 An impressive collection of new restaurants, apartments, sports venues, and renovated theaters has sprouted in downtown Detroit over the past few years. But Quicken Loans Inc. Founder and Chairman Dan Gilbert, a catalyst for much of the new development in Detroit, and Detroit Pistons owner Tom Gores, say the downtown needs a more attractive “front door” to greet those coming into the city.

The pair is proposing a $1 billion development that includes a professional soccer stadium, a hotel, offices, residences, stores, and restaurants on Gratiot Avenue at I-375. The pair says it will serve as a welcoming gateway to the fast-growing downtown Detroit sports-and-entertainment district.

Supporters and some development experts agree, saying that adding a Major League Soccer center to the professional football, baseball, and hockey stadiums downtown could be an economic boon to the city and capitalize on the rising interest in soccer.

“The thing about great walkable urban places is that more is better,” says Christopher Leinberger, a professor at George Washington University’s School of Business and an expert on urban development. “As you add more activity, downtown areas become safer, more vital, and attract more people. It starts this upward spiral that generates more taxes and jobs.”

Wayne County, which owns the site where Gilbert and Gores want to build a 20,000-seat to 25,000-seat soccer stadium and surrounding development, could shut the front door on the two billionaires. Gilbert has been working for three years to acquire the property, which includes the unfinished Wayne County Jail; a project halted in 2013 over concerns about massive cost overruns.

“Do we want a major jail at the front door of downtown?” Gilbert said when he, Gores, and Major League Soccer Commissioner Don Garber announced their plan in late April. “If there’s an alternative, is that a better alternative?”

The financially strapped county sank close to $150 million into the jail construction project under former County Executive Robert Ficano. His successor, Warren Evans, has said he thinks the best solution is to finish the work on the jail, although he and other county officials have continued their discussions with Gilbert. “We cannot allow the taxpayers to foot the bill for anything over and above the cost of finishing the jail at the current site,” says James Canning, a Wayne County spokesman.

Gilbert wants to move the jail operations — along with a juvenile detention center, the Frank Murphy Hall of Justice, and neighboring facilities — to the former Mound Road Correctional Facility on the city’s east side. The proposal also may include moving the 36th District Court at Madison and Brush streets to the Mound complex.

Matt Cullen, president and CEO of Rock Ventures, the umbrella organization overseeing Gilbert’s portfolio of more than 50 companies, says his team is working to figure out the cost difference between finishing what he calls “the failed jail” and building a new criminal justice complex on another site. The outcome could determine how much Gilbert and Gores would offer to pay for the Gratiot site.

As part of his research, Gilbert has hired CGL Cos., a Miami-based correctional facility consultant and builder, to estimate the costs of completing the jail or moving the operations to the Mound Road site. Cullen says the analysis should be completed by the end of September, about the same time Canning says the county intends to request bids on finishing the partially built jail. “We need an alternative scenario (for a new jail) in the same time frame,” Cullen says.

In April, Gilbert said there was no “Plan B” for the soccer stadium development. Cullen concurred. “All of our focus is on the jail site,” he says. MLS Commissioner Garber said the location is a “key part to the plan” in which the league would grant an MLS team franchise to Gilbert and Gores.

The 15-acre redevelopment project, bounded by Gratiot, the I-375 service drive, and Macomb and Beaubien streets, would need to be approved by the Wayne County Commission. As it stands, the current site does not generate tax revenue. If the county moved the jails and courts to Mound Road, another non-tax-producing parcel, it would generate substantial new revenue from Gilbert and Gores’ private development in the form of property taxes and other levies.

Some say it’s hard to know whether those predictions will be realized because professional soccer is a comparatively new sport in the United States. MLS, founded in 1996, has 20 teams across the country and is decades younger than other U.S. pro sports leagues, including Major League Baseball and the National Football League.

“It remains to be seen what having this team in town will mean for the economy,” says Dave Beachnau, executive director of the Detroit Sport Commission, which works to boost tourism in the city by attracting sporting events, “but I think it will lend itself to bringing other events to Detroit that increase direct spending.”

The proposed soccer stadium would give the city another venue to attract concerts and sporting events that don’t require the larger seating capacities of Comerica Park and Ford Field. “Having a midsized stadium would really fill a void in our market,” Beachnau says. “I could see it hosting NCAA soccer, lacrosse, and other events. From a tourism standpoint, it would be one more asset for us.”

Professor Leinberger says the most successful sporting venues for downtowns are indoor arenas, particularly basketball arenas, which can host up to 250 events a year. But soccer arenas are too new to judge how much of a spinoff economic impact they produce, he adds. The key is whether those attending games can easily walk to restaurants and other downtown attractions, something both Gilbert and Gores say are a part of their proposed stadium. 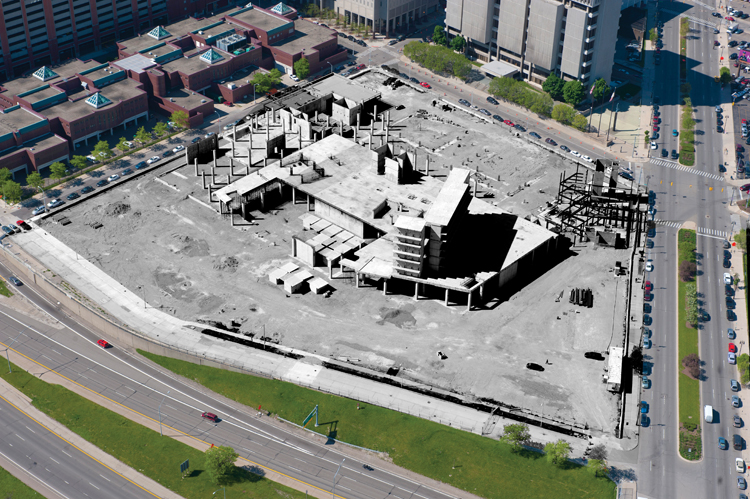 Some studies have shown that sports stadiums, many of them financed at least in part by taxpayers, provide little economic benefit to cities. Leinberger, however, says putting a sports venue at the center of a larger mixed-use development has the potential to draw many more people and dollars to urban cores.

Mike Ilitch, who owns the Detroit Red Wings, is employing that strategy in building the Little Caesars Arena for the team. Plans call for 50 blocks of development including restaurants, bars, parks, businesses, and new homes at I-75 and Woodward Avenue, at a cost of $627 million.

Mark Rosentraub, a sports management professor at the University of Michigan in Ann Arbor, was among those who long regarded sports stadiums as economic losers for cities. Now, he believes they can help older cities like Detroit regain vitality after a decades-long loss of development to the suburbs.

“Sports is an extremely valuable tool, and if a city uses it properly and builds a new neighborhood anchored to a facility, sports (facilities) can, indeed, lead to urban revitalization and the relocation of regional economic activity,” Rosentraub wrote in a recent blog post.

Of course, Gilbert — who owns the Cleveland Cavaliers — and Gores need an MLS franchise to make their project a reality. MLS’s Garber strongly suggested in April that Detroit would get a franchise if it can acquire and redevelop the jail property.

“Detroit is one of those markets that intrigued us” from a geographic expansion standpoint, Garber said in April. “More importantly, if you look at the passion, and the energy, and the millennial-driven (culture) and ethnic diversity … that’s the kind of dynamic that exists right here in the city.”

MLS is in the process of expanding to 24 teams from its current roster of 20 clubs. Detroit is among seven cities vying for the new franchises, which will likely be awarded by 2020. Cullen says having the stadium built in that time frame would be an “aggressive, but exciting” target. The project would be funded mostly with private dollars, but some taxpayer support could be required for infrastructure and other public improvements, he says.

Promoters have been trying for years to bring pro soccer to Detroit. Dan Duggan, who owns the Michigan Bucks semi-pro soccer team in Oakland County, and his brother, Jim, started MLS Detroit in 2002 to generate interest in bringing an MLS pro franchise here. Their brother is Detroit Mayor Mike Duggan.

A few years ago, Dan Duggan says he tried to get the owners of Detroit’s pro sports teams to back a plan in which the city would guarantee 10,000 season ticket reservations as part of a bid for an MLS franchise. There wasn’t enough interest, and the plan died. “What we lacked was deep-pocketed ownership,” Duggan says.

Derderian says he supports the project, in part, because he thinks bringing pro soccer to Detroit will create even more enthusiasm for a sport that’s growing in popularity. There are 92,000 registered youth soccer players in Michigan, and some say there are at least as many individuals playing at for-profit venues like Ultimate Soccer Arenas. 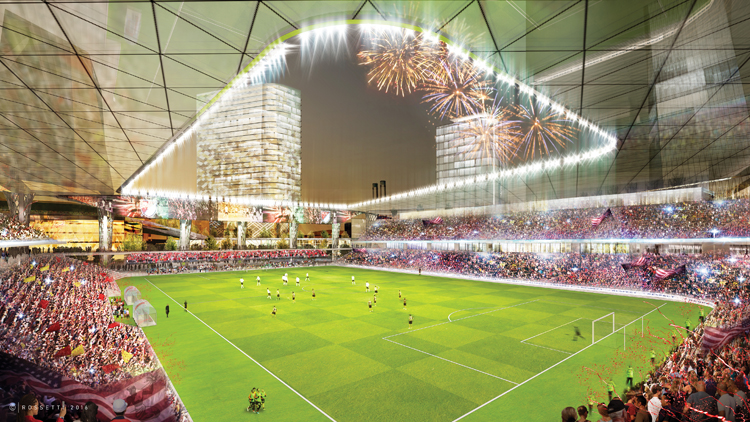 What’s more, in 2014, a soccer match between Real Madrid and Manchester United at Michigan Stadium in Ann Arbor drew 109,318 fans — the largest attendance ever for a soccer game on U.S. soil. Real Madrid and Chelsea will face off at the Big House on July 30.

“I can see the value of having the world’s most popular sport in Michigan and Detroit,” Derderian says. To quantify growing interest in soccer, he projects 1.3 million children, parents, and adults will use his facility this year, up from 1 million last year.

Not everyone is overjoyed at the prospect of Detroit getting an MLS franchise. The owners of the Detroit City Football Club, a semi-pro team that attracts hundreds of fans to its games, have expressed fears that pro soccer could overshadow their team and other similar clubs in the state.

Most recently, Detroit City FC raised about $750,000 from its fans to renovate Keyworth Stadium in Hamtramck, where the team moved this year from a smaller field at Cass Technical High School. Keyworth seats up to 7,000 people.

After Gilbert and Gores announced in April that they would seek an MLS franchise, Detroit City FC’s owners issued a statement questioning whether the proposal would be in keeping with the “grassroots” nature of Detroit soccer.

“We have always believed that for soccer to live up to its full potential in southeast Michigan, a team must be connected to the community and focused on soccer supporter culture,” the statement said. “The founding of a professional team is a golden opportunity, but in an already crowded market, success is never guaranteed.”

Rock Venture’s Cullen says people should “put aside” any worries about whether Detroit will be awarded an MLS franchise. “They want to be here,” he says.

Others say there’s room for soccer at all levels in metro Detroit, and a pro team could help showcase local soccer talent. Dan Duggan compares it to football, where fans attend high school games on Friday night, college games on Saturday, and pro games on Sunday. “It’s something that’s long overdue. I don’t see it as a threat to anybody,” he says. “Having MLS here at the top of the soccer food chain is great for everybody.”

A downtown soccer stadium will add to the energy that already exists in Detroit’s theaters, opera house, nightclubs, casinos, and sports venues, George Washington University’s Leinberger says. All those things “are making Detroit a Midwestern mecca for urban entertainment.”