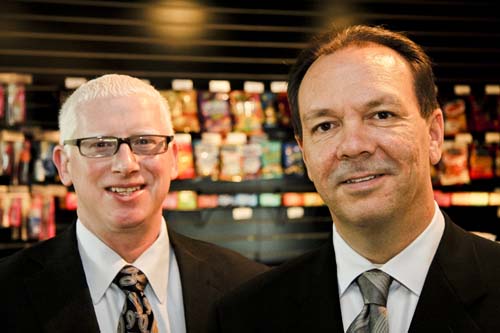 Innovation doesn’t come easy, especially in the ultra-competitive food service industry. So when Ray Friedrich and Chris Peppo hatched the idea of installing mini-markets inside large office and medical buildings, they had to overcome labor costs to make it pay off.

“We’re not putting people out of work because, without us, it  would be back to the vending machines,” says Friedrich, CEO of Sterling Services Inc. in Canton Township. “But the numbers don’t work with lots of labor, so we developed a program where customers select the items they like, check themselves out, and pay using a credit card or store account.” In larger companies, Friedrich says they hire chefs to work on-site.

So what about the potential for theft? “It’s negligible,” says Peppo, director of vending operations. “We have (security) cameras set up in the markets. No one wants to lose their job stealing a candy bar.”

The mini-market concept, which has been introduced in 30 locations around the region, varies based on the facility and tenancy. Apart from its hybrid markets, Sterling Services operates a variety of food services, including vending machines in 220 locations. The company also consults with large corporations around the country on their needs for food services. Automatic Merchandiser, a trade magazine, cited Sterling Services for starting the “micro-market” concept.

At the Comerica Bank processing center in Livonia, for example, Sterling Services changed the cafeteria into a buffet-style restaurant. There’s no salad bar in the cafeteria; rather, customers select a salad from a posted menu or have a chef create one. Soups are made from scratch, bread is baked daily, and entrees change each day.

“We get about 600 people coming through every day, and those numbers are going up,” Friedrich says. “At other locations there’s no chef on-site, so we offer cold sandwiches, pizzas, and other items that can be heated in a microwave.”

Food sales average 36 percent at the micro-markets, compared with 12 percent from vending machines. “If people can pick up a clear container and look at a sandwich or salad, it gives them more confidence to buy it,” Peppo says. “It’s the exact same food in a vending machine, but people can’t pick it up.”

For organizations that are used to spending $165,000 or more a year operating a cafeteria, the prospect of providing food at any hour of the day at minimal costs to their bottom line is compelling. “We offer food, beauty products, aspirin, popcorn, you name it,” Friedrich says. db