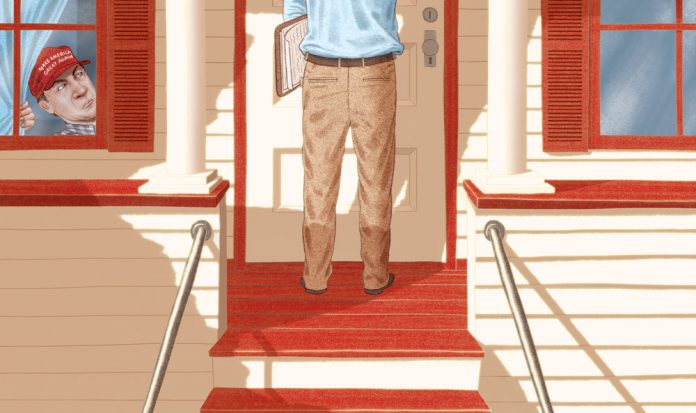 Almost everyone had simply dismissed it as nothing more than the showman seeking one last round of publicity. What other reason would Donald J. Trump, the most unconventional Republican presidential nominee imaginable, have for holding a rally at Freedom Hill Amphitheater in Sterling Heights less than 48 hours before Election Day?

Politically speaking, before he even took the stage in the early evening, Trump was already a dead man walking — at least in the eyes of most local and national pollsters.

Polls — the statistical snapshots in time meant to gauge how an electorate will actually vote — conducted in Michigan never showed her relinquishing her lead in the state. To make matters worse, the most recent Michigan surveys undertaken just before Election Day showed Clinton, dubbed by many as “the most qualified” person to ever seek the presidency, sitting on nearly a seven-point lead.

On the national front, respected polling outfit Reuters/IPSOS was giving her a 90 percent chance of winning the 270 electoral votes necessary to assume the office.

By every indication on paper, Clinton — the first woman ever to secure a major party presidential nomination — was on a turbulence-free glide path to becoming America’s 45th commander in chief. The only relevant question pertaining to Trump was whether he planned to taunt the media one last time by not conceding the national race when it became clear that Clinton was going to be running up the Electoral College score.

Of course, as it’s now widely known and well-documented, a series of political earthquakes occurred throughout the country, preventing Clinton from reaching the White House. Michigan did not avoid the seismic event and the showman did, in fact, astonishingly become president of the United States.

In a scenario that virtually no one could have predicted, Trump ended up taking Michigan by the razor-thin amount of just 0.3 percent — 47.3 percent to 47 percent — with only 10,740 votes separating him and Clinton. With the upset, Trump outperformed his Michigan polling average on Real Clear Politics by nearly four percentage points.

In the immediate aftermath of the electoral shock, certain things became perfectly clear. For Trump, orchestrator of the “Make America Great Again” movement, November 8, 2016, in Michigan was a perfect set of political circumstances fully realized.

Riding a seemingly unforeseen wave of populist rage and unusually high blue-collar support for a Republican of any persuasion, Trump took 75 out of 83 Michigan counties. More telling, he successfully managed to flip 12 counties — ranging from Monroe to Saginaw — that President Barack Obama effortlessly won in 2012 over Mitt Romney. Overall, President Trump decisively over-performed in working class areas like Macomb County, where turnout was up 4 percent from 2012, and he ran up large vote totals in rural portions of the state that Clinton couldn’t offset in typically reliable suburban Democratic strongholds.

As for Clinton, Michigan proved to be an absolute nightmare. Ultimately done in by a lack of enthusiasm with minorities and underwhelming millennial vote totals, she had no chance of ever coming anywhere near reaching the Obama-like voting levels her campaign was aiming for. In Wayne County alone, Clinton received nearly 79,000 fewer votes than Obama did just four years prior.

Arguably, the most damning result of all was her performance with women. While Clinton did win Michigan women overall by 11 points, she ended up losing white women to Trump by 4 percent.

Given all that’s transpired since Election Day, one of the most oft-asked questions still being pondered months later is: How did polling in Michigan so badly miss the mark? After all, although it’s just one portion of an overall $20-billion-a-year industry, political polling determines the fate of entire political careers and proposed public policies.

Accuracy is, and always has been, the name of the game.

As it stands, many of the same issues that plagued polling results nationally — indicating an anticipated weak turnout for Trump — managed to make their way into Michigan projections. Specifically, aside from 2016 being an extremely rare instance where state and national polls didn’t track simpatico with one another, a flawed series of assumptions regarding Clinton’s expected turnout were nearly universally made.

Essential contacts with Trump voters by way of automated telephone polling came up short in numerous instances, preventing election models in the state from ever having a chance. Veteran Michigan pollster Steve Mitchell says the reasons why his numbers came up short are rather easily explained.

Mitchell, chairman of Mitchell Research and Communications in East Lansing, which conducts automated telephone polling for Fox 2 Detroit, says he believed Michigan’s 2016 electorate was going to more closely resemble the one that surfaced in 2012, when President Obama ran up impressive vote totals throughout the state against Romney.

In short, Mitchell simply misread the voting public. “We had our turnout model wrong,” he  says. “Had we weighted to 2004, we’d have been spot-on.”

Anticipating a big turnout for Clinton that would likely replicate Obama-like margins with millennials and minorities, Mitchell says his calculations were skewed to a more diverse turnout model. In particular, he says there were “too many younger voters in the 18-40 age range” that ended up appearing in the election model, strongly suggesting a comfortable win for Clinton in Michigan.

Arguably, and perhaps more troublesome than that, information pointing to a strong Trump turnout didn’t end up making it into his numbers as the election approached. “It was clear we were getting fewer samples (poll respondents) from northern Michigan and Macomb County,” Mitchell says of two notable areas where Trump ran up high vote totals that Clinton couldn’t counter.

Both areas of the state ended up with a strong contingent of unwavering Trump supporters who, when surveyed after the fact, revealed a prominent 2016 election theme in Michigan. “There were a lot of retired auto workers that were dissatisfied with the direction of the country that ended up voting for Trump,” Mitchell says.

Adding to Mitchell’s challenge in trying to accurately project the state was the fact that a good many of those who turned out to be Trump voters seemed to have an aversion to pollsters altogether. Mitchell claims that Trump voters weren’t “lying” to pollsters out of shame, or were purposely trying to throw polling results in flux, as some pundits have suggested.

The reason why Trump supporters managed to stay under the radar was far simpler than that. “Trump voters weren’t answering the phone,” Mitchell says.

Rich Baris, founder and editor of People’s Pundit Daily, a political news website based out of Florida, ended up seeing things in Michigan quite differently. A pollster by trade, Baris is quick to admit that Michigan is “extremely difficult to poll” due to an independent streak ingrained in its voters.

According to Baris, that independence was just one of the decisive factors that put Trump over the top in the state. “Independents went for him like crazy,” he says.

Baris, who uses a proprietary polling methodology that incorporates using web data and intensely screened panelists, tracked the head-to-head national Clinton vs. Trump matchup daily starting last July. To go along with that everyday track, he also polled a series of swing and battleground states, including Michigan, at designated times.

Although he saw “movement” in the state beginning to favor Trump as the election drew nearer, Baris admittedly found himself somewhat surprised when, some 48 hours before ballots were to be cast in precincts, his Michigan numbers — based on a five-day rolling average — showed Trump leading Clinton by a single percentage point.

Baris says one undeniable fact that Trump always had in his favor, both nationally and in Michigan, was a highly motivated core group of voters who were going to vote. Amid a handful of pollsters around the country who monitored voter intensity daily, Baris says it wasn’t at all uncommon for Trump to ace Clinton on any given day by “25 points” nationally in that category. “Trump always had more excitement (than Clinton),” Baris says.

One point clearly missed by in-state Michigan pollsters was the fact that Vermont Sen. Bernie Sanders, who had vied for the Democratic Party nomination before dropping out and endorsing Clinton, still loomed large, long after he ended up leaving the race.

Baris says that throughout the general election cycle, anywhere “between 15 and 18 percent of Bernie (Sanders) voters were constantly flirting with Trump in Michigan.”

Another, and perhaps underappreciated, point had to do with Michigan seniors, who largely went for Trump, Baris says. “That’s unusual, because older voters tend to stay Democrats.”

Moving forward, Baris advises pollsters working in Michigan that they should move beyond relying solely on phone polling, if possible. In addition, he says, pollsters should embrace analytical web data-gathering methods at the earliest opportunity.

Most importantly, pollsters should drop any preconceived electoral assumptions from the start. As Baris saw it, too many in Michigan were going to great lengths in 2016 to project an electorate that simply didn’t exist. “I let the electorate talk to me,” Baris says. “If you have a good sample, listen to it.”

Considering how off presidential polling in Michigan turned out to be, some have even wondered whether media coverage and political analysis in the state during 2016 was inherently flawed from the start.

While conceding that polling and political news coverage are intrinsically linked, he doesn’t believe that local political analysis suffered as a result of inaccurate data. “One would be inclined to say yes (in terms of suffering), save for two factors,” Scillian says. “First, while polls do appeal to the urge in many political talkers to focus on the horse race aspect of the election, most of us know they’re just snapshots and things can change quickly.”

Even though Scillian frequently moderated Flashpoint panels where election polling was cited and discussed at some length, he most often recalls election talk veering off into the unpopular choices Michigan voters had before them. “I think a lot of political analysis was about the fact that we had two very flawed candidates,” Scillian says of Clinton and Trump, who both had off-the-charts unfavorable ratings.

Given the likelihood of a skeptical public, at least in the immediate future, Mitchell believes polling is only going to get more difficult for those trying to project the gubenatorial election in 2018 and the presidential election going into 2020, especially if pollster corrections aren’t made. “(Polling is) really a tough business,” Mitchell says. “It was much easier 20 years ago. It’s only going to get harder going forward.”