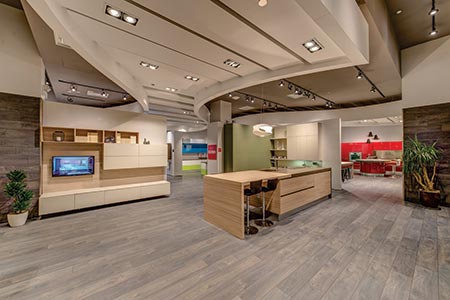 What happens when a company suddenly finds its sales surging in another state? Does it pull up stakes to serve the growth, or invest in new employees and try to manage the operation from afar?

Sisters Alicia and Niki Serras, along with Brian Gamache, who own Scavolini by Cucina Moda, a kitchen and bathroom design house in downtown Birmingham, decided it was better that one of them commute to Chicago each week to meet the demands of a new store they opened early last year on the first floor of the Merchandise Mart.

“There (are) so many people coming through the building, and they all have to walk by our store,” Niki says. “We decided I would be the one who would commute back and forth, while Alicia and Brian oversee our Birmingham store and all of the loft projects we have going on, especially in Ann Arbor.”

With a four-month lead time for an average project — each custom kitchen or bathroom is built in Italy, shipped to the client’s location, and installed by Scavolini — the company was able to manage the sudden surge in sales from the Chicago store. “We were able to figure out how to speed up the ordering process after we got the final (client) orders completed,” Niki says.

Founded in 2010, at the same time the national economic recovery took hold, the company quickly generated a steady revenue stream from home remodeling projects. Over time, new home-building projects began to increase and, in the last few months, a surge of loft residents have wanted their kitchens and bathrooms upgraded.

“It’s like most new businesses — first you go around and meet people and explain what you do, then you deliver on what you promised, and finally you watch your sales grow as other people learn of what you do,” Alicia says. “We just wish that (last) part would go a lot faster, but I think every entrepreneur goes through that.”

The surge in loft renovation projects in Ann Arbor is starting to hit downtown Detroit and other urban areas, Alicia adds. “The trends we’re seeing are thin countertops and mixing rustic with something more modern. We (also) do a lot with glass, which provides for a cleaner look. With our success, now we’re looking to add more stores.” db