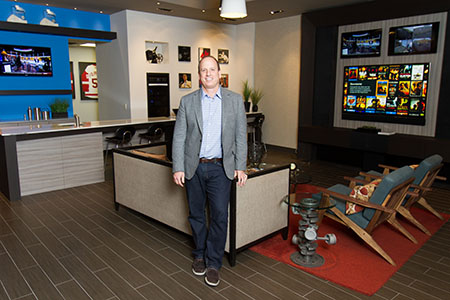 Navot Shoresh has been designing and installing entertainment systems for residential and commercial clients for years, but he’s never seen anything like the setup at a new Japanese restaurant that doubles as a product showroom. Although every business strives to maximize its resources, Genji Japanese Steakhouse, which opened in December in Novi, takes things to another level.

The 14,000-square-foot restaurant at I-96 and Novi Road (formerly Too Chez) offers Japanese dishes, sushi, and steak in a unique Asian setting. Working with the architectural firm of Ron and Roman in Birmingham, Shoresh and his team at Spire Integrated Systems Inc. in Troy designed the restaurant’s video walls, sound system, and lighting treatments.

In addition to offering a unique entertainment system, the restaurant showcases a line of teppanyaki tables developed by the Pi family, which owns four Asian-themed restaurants in Michigan plus the new Genji — the family’s flagship enterprise.

The movable teppanyaki tables, where diners or a chef can prepare a certain style of Japanese cuisine on a flat, inset stainless steel grill, range in price from $15,000 to $40,000 and are made in Taiwan. The final assembly is handled in a building next to the steakhouse. The Pi family plans to sell 2,500 of the tables annually.

“When you’re creating an experience everything must be coordinated, so the video walls will show scenes from a Japanese village,” says Shoresh, president of Spire Integrated Systems. “We also can project images on shoji screens, while the lighting can be themed to specific music or an event. We plan to bring in our clients, so it will be a showroom of sorts for us, too.”

A former sergeant in the Israeli Special Forces, Shoresh moved to Detroit in 1994 and used his electronics background to upgrade audio and visual equipment at Joe Louis Arena. Soon after, he started installing home entertainment and automation systems for Detroit Red Wings players, coaches, and executives.

“When we opened Town Tavern (in Royal Oak), we had more space for TVs and sound, so we needed someone like Navot and his team to coordinate everything,” says Bill Roberts, owner of Roberts Restaurant Group. Roberts says Spire, along with Ron and Roman, will oversee his upcoming restaurant, Café ML, set to open in the spring at Maple and Lahser in Bloomfield Township. db