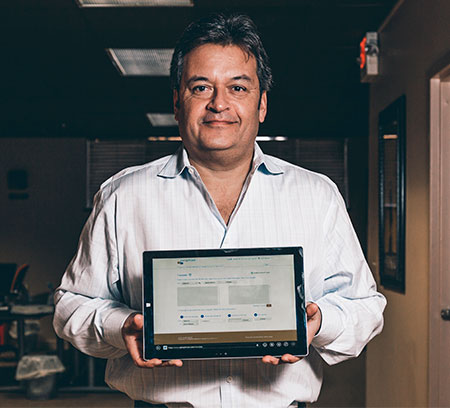 When Google started offering online language translation, the traditional service business of converting foreign documents into English, or vice versa, was prime for a major disruption. Rather than close up shop and turn the page, Rick Woyde, managing director of Language Arts and Services in Royal Oak, developed an online tool to compete with the search engine giant.

Last August, Woyde — whose father and uncle got into the translation business in 1971 — launched an application called Pairaphrase. The service, which is now offered on desktops and tablets (a mobile app for iPhone and Android will be available this year), allows users to safely and securely translate internal documents and communications, as well as websites, in virtually every language and file format — PowerPoint, Word, InDesign, HTML, and XML.

Unlike Google’s offering, Pairaphrase does not index or submit user content to public search engines, ensuring that all information that’s uploaded is protected. Additionally, the app is equipped with translation memory that stores previously translated words and phrases in a secure database, allowing for faster and more cost-effective translation services.

“As businesses continue to grow and expand their operations and relationships overseas, translation services have become an integral component in day-to-day functions,” Woyde says. “Pairaphrase was designed to protect businesses in their communications, providing them with a safe and secure platform to translate and format documents in less than half the time it would take a human translator.”

Pairaphrase has more than 100 companies using its services, including Delphi, Toyota, JCI, Navistar, Daimler, and the Asian Pacific American Chamber of Commerce in Troy.

“(Our) membership is comprised of many ethnic groups in which the cultural language differs slightly for each region,” says Van Nguyen, APACC’s executive director. “With the help of Pairaphrase, we can now ensure that all materials, including press releases and e-blasts, are properly translated.”

“Historically, German, Spanish, and French have been the most popular translation offerings, due mostly to NAFTA (the North American Free Trade Agreement),” Woyde says. “But the last decade has seen an explosion in foreign trade, so I started my own company (in 2009) after working with our family business. I certainly understand the cultural differences out there, as I am half German and half Uruguayan.”

Last year, Woyde says revenue grew 46 percent, and in 2015 the company is expected to double its sales to $1.4 million. “We’re planning to offer more services,” he says. “We’re not setting the world on fire, but we’re making it a lot easier to communicate effectively across multiple languages and online offerings like PowerPoint and Word.” db