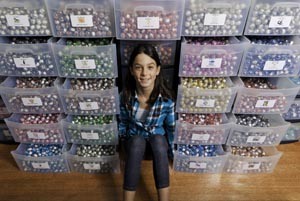 Entrepreneurs come in all shapes and sizes. Take 10-year-old Hannah Altman, for example. It wasn’t long after she asked her father for four quarters to buy a toy in a vending machine that she joined the ranks of CEOs like Ford’s Alan Mulally and Compuware’s Peter Karmanos Jr.

“I got this pencil topper and thought it would be really cool if I had my own website to sell them,” says Hannah. So, with her parents’ assistance, Hannah created and launched www.hannahscoolworld.com two years ago. Since then, she’s sold more than 250,000 pencil toppers. She’s also moved a similar amount of scented pens, toy figurines, friendship bracelets, and dozens of other play items. She even writes a blog about her toys.

The website is doing so well that Hannah’s parents have quit their day jobs and now work full-time with their budding president and CEO (the couple serve as managing partners of the parent company, IBeOn LLC in West Bloomfield). Revenue for 2010 is expected to reach $500,000.

“It all got started when I went to make a zipper pull for my husband’s fleece (in 2007),” says Lauren Altman, former executive director of the Michigan chapter of Camp Mak-A-Dream. “When we were putting it together, Hannah said we should sell them. We started a website after getting a good response at area art fairs.”

Rick Altman, a former technical communications manager at Federal Automated Parking Devices in Novi, says he left corporate life because he was working nearly 100 hours a week between his day job and www.coolzips.com. “The zipper pulls really took off, and we were able to manage everything on nights and weekends, and then Hannah’s site came online and it got to be too much,” he says.

Hannah selects all of the merchandise, which includes dozens of toys priced from 25 cents to $25, for her site. Her parents attend toy shows and research hot products in Europe and Asia before presenting the ideas to Hannah. “We’re coming out with some farm animal toys, plus these really cool watches with rubbery bands,” says Hannah, showing off a bright purple model that has a face that changes colors according to a person’s mood.

A family affair, a nephew of Rick’s who lives in Philadelphia located factories in the Far East to produce the zipper pulls. He also makes periodic site visits. In turn, Lauren found a company in Los Angeles that tested the zipper pulls for lead. But the toys are the big seller.

“We’ve learned to pick out as many toys as possible, because even though Rick and I will think no way will a particular toy sell, Hannah will like them,” Lauren says. Customers, who are typically 6 to 14 years old, include toy enthusiasts, collectors, and traders. “Hannah is right in the mix,” Lauren says.

In an average week, between 500 and 700 orders come in. They’re all sorted and packaged in a converted bedroom. Another room serves as the company’s headquarters, while the distribution center is close by. “Everyone at the West Bloomfield Post Office knows us by name,” Lauren says.

While some of the profits are going to fund Hannah’s college education (she wants to attend the University of Michigan), the child prodigy has purchased toys, an electronic keyboard, drums — even violin lessons.

Asked about her business philosophy, Hannah doesn’t hesitate. “It’s like my dad said: Find something you really like to do. And if it’s a once-in-a-lifetime opportunity, you should take it because it won’t come again.”