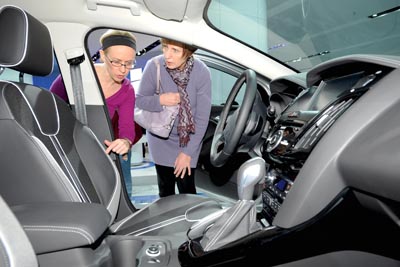 Maxine Lauer prowls the floor of major consumer and trade shows like a big-game hunter. Armed with a camera, a notepad, and a near-encyclopedic knowledge of colors, fashions, and trends, she spots her most recent prey: Cadillac’s XTS Platinum Concept Hybrid.

The car’s exterior is bathed in a warm, dark gray that Cadillac calls Platinum Ash Metallic, while the interior features Voyage Bronze accents and Birch burl veneer. Lauer scrutinizes the depth of the car’s color and how the angle of the door flows into the body — like water.

“I love the uses of the mixed materials, the warmness of everything. You almost feel cocooned,” says Lauer, CEO of Sphere Trending, a Waterford Township-based firm that counsels companies around the world on the latest consumer trends — whether it’s colors, textures, shapes, or finishes.

By attending some 40 top-line shows each year, Lauer and her 12-person staff combine their observations with consumer research to produce targeted data for clients that include appliance manufacturers, office-product makers, and electronics companies.

So if you like the color of the XTS, scheduled for release late next year, or the 2012 Ford Focus hatchback, expect to start seeing that particular shade on consumer goods such as cameras and coffeemakers. Lauer says her company recently recommended the candy-apple red color on the Focus hatchback to an appliance manufacturer. “It’s a very romantic red,” she says. “There’s a feminine touch to it. You’re going to see it on coffeemakers, toasters, and mixers [starting] in spring 2011.”

In Detroit, not only does Lauer look at the automakers’ latest and greatest introductions, but she also wants to see which vehicles attract the largest crowds.

The feedback is combined with thousands of photographs aimed at making those insights crystal-clear. The end result is an 80-page report chronicling what was seen and how it affects a specific client going forward.

For example, today’s high-end wood veneers or sleek metal finishes will most likely find their way into designer home furnishings like faucets, cabinets, or furniture, often within a year of first appearing.

In addition, Lauer and her staff take annual trips to cities around the U.S. to scout for colors and patterns among custom-built homes, restaurants, and other locations. But not every trip produces the desired result, Lauer says. “I still haven’t found the new white.”