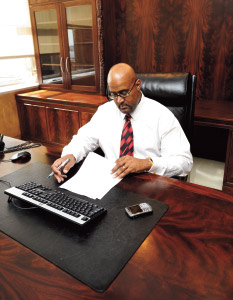 Detroit Mayor Ken Cockrel Jr.’s business philosophy is simple: “We need to establish a climate where businesses are ripe to grow and be profitable,” he says. “We also need to set a strong environment for new businesses to be created. Once that’s done, we just need to get out of the way and let them be successful.”

After two weeks on the job, Cockrel says the challenge of running a major American city has been both stressful and rewarding. “It’s a monster,” he says of operating the country’s 11th largest metropolis. “I’m enjoying myself, but people are really coming out of the woodwork. It’s like trying to hold a tiger by the tail. It feels like you’re doing something productive, but it’s not a 9-to-5 job.”

So far, Cockrel has gotten high marks from the business community. His no-nonsense style, plus a  strong moral attitude, have been a sharp contrast to the previous administration. The former journalist also has a common touch that has won the respect of citizens, both locally and regionally.

In addition to jump-starting the expansion of Cobo Center, the mayor wants to clean up the city’s financial house and has hired former Auditor General Joe Harris as CFO. He also plans to reduce crime and make the police more responsive by setting up numerous mini-stations.

“If I hadn’t been on the Detroit City Council almost 11 years, I don’t think I’d have a feel for a lot of the issues,” he says. “Without that background, I’d be overwhelmed.”