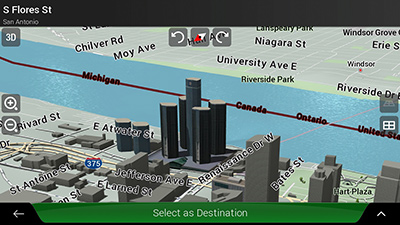 Remember the days when a simple road map or a gas station attendant were the only ways to get directions to a hard-to-find address? Over the last five years, in-vehicle navigation systems and smartphones have revolutionized wayfinding, but they have their shortcomings.

Colored, linear maps that appear on a screen vastly improve navigation in most situations, but dense street-grid patterns or buildings set off from a road or an alley can still be difficult to find. That will soon improve as NNG, a navigation software provider to the global automotive industry, adds images of actual buildings on a dashboard or a smartphone screen.

“You can literally be driving along Jefferson Avenue in downtown Detroit and a very lifelike image of the Renaissance Center will be displayed on your screen,” says Jim Robnett, vice president of automotive OEM relations at NNG, which recently established its Office of the Americas in Birmingham. “All the other surrounding buildings and infrastructure appear, as well. It’s almost like you’re driving in a virtual reality movie.”

The company, which has its headquarters in Budapest, Hungary, got its start in 2005 by developing software for the gaming industry. The firm, which today has 1,000 employees, quickly saw an opportunity to provide global automakers with digital mapping services. The so-called white label navigation system, dubbed iGO, allows NNG to sell its services to several different automakers.

“Basically, the backend software system can be used on any (new) vehicle, and then we modify it to fit a particular automaker’s navigation system,” says Robnett, former director of Chrysler Group’s in-vehicle phone, mapping, and infotainment offering, called Uconnect. “We’re still 10 years away from a critical mass of autonomous vehicles, and iGO is designed to help get us there.”

The Tier 2 auto supplier works with more than 30 brands, including General Motors, Chrysler, Fiat, Ferrari, Porsche, and BMW. “Our platform is available on luxury cars, sedans, SUVs, even small cars,” he says.

The company’s office in Birmingham, located in a former post office, will have 15 employees in 2016, up from eight workers today, Robnett says. The company has 10 offices around the world, including sites in Europe, Israel, Japan, and Great Britain.

“For a specific market like Japan, we hire local experts because they need to be on the ground, so to speak, to understand the infrastructure, the roads, the traffic, and what the preferred user experience is,” he says. “We want to know the best way people communicate with their navigation system. Is it by voice, touch, dials, or tumblers?”

As the system progresses, elements such as current traffic and weather conditions will be factored into a planned route. Speed warning and lane warning alerts will also appear. “It’s a robust system that’s only going to get better,” Robnett says. db