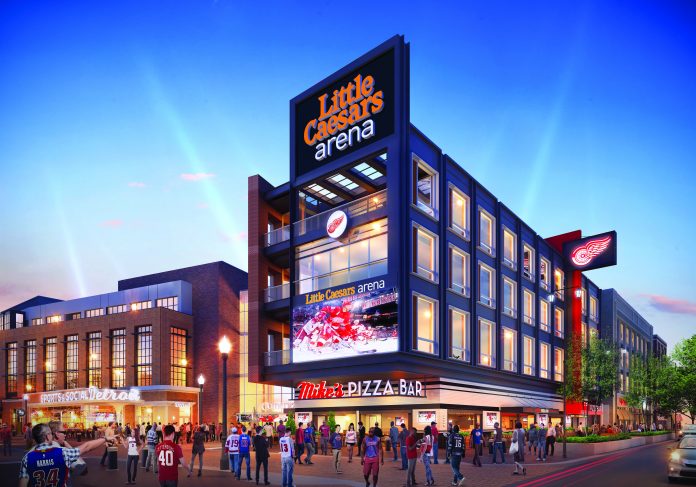 Chris Ilitch, president and CEO of Ilitch Holdings Inc., which owns the Detroit Red Wings, Detroit Tigers, Fox Theatre, and other operations, could have easily signed a lease with a name brand restaurant for the marque space at the main entrance to Little Caesars Arena. But honoring his parents came first.

In August, Ilitch announced that the restaurant space at the southeast corner of the arena, at Woodward Avenue and Henry Street and next to the entrance to the Via, a covered street plaza inside the venue, would be home to Mike’s Pizza Bar, in honor of Mike and Marian Ilitch (Mike Ilitch passed away in February).

“My father started in the pizza business when he was home from playing minor league baseball in Florida. He would hook up with his buddies, and in 1952 one of his buddies was working in a pizza restaurant,” Ilitch says.

“So my father asked if he could work there for free. He loved the product, it was new, it wasn’t a well-known product, and he was just in awe that you could take flour, water, oil, salt, and sugar and put it all together and this dough gets created, and then the toppings went on it.”

The following winter, Ilitch says his father decided he was going to open his own pizza shop, and he approached the woman who owned Haig’s Bar on Livernois Avenue in Detroit about using some of her space. The woman agreed because she thought Mike was “a
cute guy” and she wanted to give him a shot.

“I say shop, but it was inside a closet in her bar, some 200 or 300 square feet,” Ilitch says. “He would pay her a percentage of revenue, and for the winter he sold pizza out of that closet. It was at that moment that he thought, ‘Wow, this is an incredible business.’ And when he went back to playing baseball, he would tell his buddies that ‘If I don’t make it in baseball, I’m going to open up a pizza shop in every town across America.’ ”

From there, Mike and Marian launched Little Caesars Pizza in 1959 in Garden City (the store is still in operation). Today, the company operates more than 4,200 locations in the United States and some 20 different countries.

Mike’s Pizza Bar will feature artisanal-style pizza and other menu offerings in an open kitchen setting. The contemporary restaurant is scheduled to open on Sept. 12 when entertainer Kid Rock begins the first of six concerts at the arena.

“Mike’s Pizza Bar was inspired by (my father’s) beginnings selling pizza in a bar,” Ilitch says. “To me it just felt so right … and is very fitting. It all goes back to where this all started, which is Mike Ilitch opening up a little pizza operation in a closet in a bar in Detroit — and what a perfect way to honor the man that started all of this that we’re seeing today.”