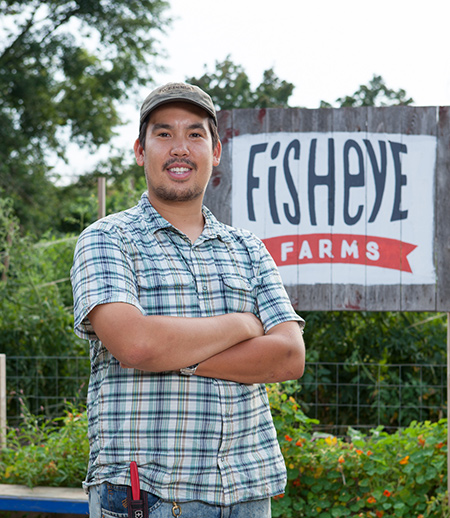 On Detroit’s east side, Andy Chae is working the front lines of urban farming. He hopes the small farm he maintains along Van Dyke is a harbinger of a grander vision to transform several acres of land into an agricultural haven.

Joining dozens of other farming operations in the city, the largest being Hantz Farms near Indian Village, Chae has no illusions of tilling more than 6 acres, which he estimates would generate around $100,000 per year in revenue. More importantly, he sees the business as a way to provide lower-income residents with affordable and nutritional food while also supplying local restaurants with farm-to-table offerings.

“I thought of becoming a lawyer, but I couldn’t see myself doing that work,” says Chae, principal of Fisheye Farms. “During and following graduation (in 2013 from DePaul University in Chicago), I helped set up the first urban farm on campus, and I worked on a 1.5-acre farm nearby.

“I promised my girlfriend (Amy Eckert) that we would travel, so we went to Brazil and joined WWOOF (World Wide Opportunities on Organic Farms), and that’s when I saw the opportunity to get in the business of farming. But land was expensive, so I came back to Detroit and started the farm on Earth Day (April 22). Actually, Detroit is better known for urban farming than Chicago.”

Settling on Fisheye Farms, a reference to a fisheye camera lens and its ability to “take something small and make it look really
big,” Chae has produced a sizeable return in his first growing season — arugula, tomatoes, eggplant, kale, radishes, thyme, lettuce, and beets. He will work the farm through November.

Over the winter, he plans to acquire additional land and equipment so he can produce arugula, spinach, carrots, and kale in the colder months. “With a hoop house and a frost blanket, we can have a year-round business,” he says.

“I got the farm going pretty easily, and I filled out the (required) paperwork. But getting up to 6 acres has been challenging. One good source of land is the leftover school properties from Detroit Public Schools, so we’re trying to work through the process to acquire the land. My vision is to have a building with a commercial kitchen next to the farm, where we can train students (in agriculture) and host events like pop-up dining experiences, weddings, art shows, job fairs, and conferences.”

A family affair, Fisheye Farms operates from land that once was occupied by a large home built during Detroit’s industrial age. Chae’s uncle, Won Chae, now owns the land — part of a larger parcel that includes Kimbrough Dry Cleaners — while his mom, Susan Chae, helps with legal work and event-planning.

“When you look at things like the drought in California, the more options you have for locally sourcing food become all the more important,” Chae says. “Plus, we’re helping to provide lower-income residents with nutritional food that they might not ordinarily be able to afford.” db