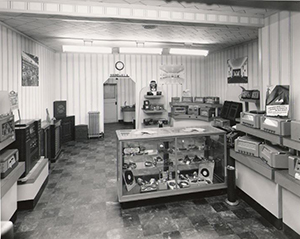 When KLA Laboratories in Dearborn got its start in 1929, radios and record players were just coming of age, and public-address systems had yet to be refined. Through an early partnership with General Motors, the company began producing radio and electronic equipment.

“(The founders) had this creative idea to come up with solutions to innovative technology,” says Matthew O’Bryan, president and CEO of KLA Laboratories. “If you think about it, audio — microphones and speakers — was high-tech in 1929. That creativity and the culture of the company have been carried on. We’re still working to come up with creative solutions, which I really think is our success.”

Since its founding, the company has built up a notable client roster including the Big Three automakers, The Palace of Auburn Hills, Comerica Park, Ford Field, Joe Louis Arena,  Michigan State University, the University of Michigan, and JP Morgan Chase, among others.

Along the way, it has provided audio systems for every president since John F. Kennedy, and supported Pope John Paul II’s 1987 visit to Detroit — along with top sporting events. In addition, KLA equipment has been used in several movies filmed in Michigan, including the upcoming Batman v Superman: Dawn of Justice.

“We’ve been at every (home) Tigers game since 1935,” O’Bryan says. “We installed the audio system at Comerica Park, and have had a technician on-site for every game ever since.”

Last June, KLA opened a new Technical Engineering Center. “TEC is where our network engineers do testing,” O’Bryan says. “The networks we deploy have a primary and a secondary head-in. If the primary goes down, the secondary automatically kicks in and takes over.”

Last July, KLA — which has 150 employees and a presence in 50 states, as well as Canada and Mexico — launched its Technical Monitoring Center, which provides network support, ticketing, and dispatch services.

“Essentially we have customers who don’t have IT support staff on-site, so we remotely monitor their networks,” O’Bryan says. “If there’s a problem and something goes wrong — say a network switch, depending on what kind of switch it is — we monitor it 24/7. If it’s determined to be an emergency, we go out right away.”

In turn, the company’s audio experts work with network services personnel as more and more programs are offered on the Internet. “It used to be just analog, but now it’s digital,” O’Bryan says. db