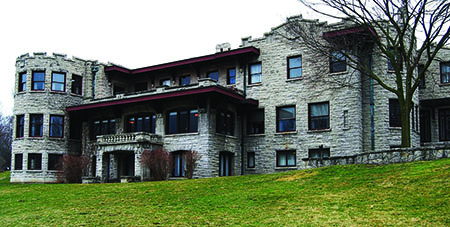 As a proponent of self-sufficiency, Henry Ford would likely be pleased with the upcoming restoration of Fair Lane in Dearborn. The automotive pioneer and his wife, Clara, moved into the 56-room, 31,000-square-foot manor in 1913 after selling a large home in Detroit’s Boston-Edison Historic District.

Built along the Rouge River and sitting on what is now the campus of the University of Michigan–Dearborn, Fair Lane was closed in late 2010 as part of a major restoration effort. Fundraising is now under way, with the estate to be transferred from the university to the Edsel and Eleanor Ford House in Grosse Pointe Shores. The goal is to build a significant endowment while adding interactive displays, audio tours, and mobile applications at Fair Lane.

Set to reopen in stages, the home and grounds will be accessible to the public for one day on July 27, as part of Henry Ford’s 150th birthday celebration.

“Knowing how active Henry and Clara were, they would never stand for a velvet rope tour,” says Kathleen Mullins, president and CEO of the Edsel and Eleanor Ford House. “In the future you will have furniture in the home, along with technology, so you could be sitting there interacting virtually with Henry Ford and some of his friends, like Thomas Edison and Harvey Firestone.”

To help facilitate future tours, a new visitor center has been proposed near the entrance to the estate, while a glass pavilion housing a restaurant is planned along the Rouge River. The restoration team includes Gallagher and Associates, an exhibit design studio in Washington, D.C., and Team Detroit, an advertising and branding firm in Dearborn. For more information, visit HenryFord150.com. db