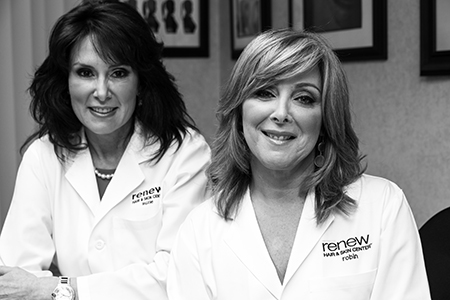 Following five years of research, Suzie Meklir and Robin Welford developed a low-level laser treatment procedure that promotes new hair growth. While not every client sees results — viable hair follicles are a prerequisite to treatment — Meklir and Welford have a roster of 800-plus clients who have experienced new hair growth from the procedure.

“When we opened our doors (in 2009), the economy was at its worst,” says Meklir, co-director of Renew Hair and Skin Center, based in Bingham Farms. “People were saying: ‘Are you nuts? This is voodoo.’ Doctors didn’t respect our system. Now, the American Cancer Society uses us as a resource, and health care groups like Henry Ford Health System refer patients who have experienced hair loss.”

Success came quickly. After being open for just six months, the pair had to move the self-funded business to larger quarters which offered four times the space. Annual revenue climbed to $750,000 last year, from $298,000 in 2009 (their first full year in business). The rapid growth also propelled talk of franchising opportunities, but the ascent didn’t come without hardship.

Steady hair loss can be debilitating, as Meklir well knows. She started losing “clumps of hair at a time” a decade ago. “I’m a very social person, so to have hair loss was embarrassing,” she says. “I wore a hat whenever I could.”

Together with Welford, a financial and real estate consultant, Meklir researched treatment offerings — some might call it a quest — only to come up empty. As time passed, Welford read about a procedure that had been in use in Europe for more than two decades. Called low-level laser light therapy, or LLLT, the system employs photogenesis to stimulate cell metabolism and boost blood flow around the scalp. “Now we have a patent for stimulating hair growth,” Welford says. “That’s what brought on the franchising opportunities.”

Working with a former computer and technical engineer at General Motors’ Cadillac Division who’s now an expert and technologist in laser and photonic systems, Meklir and Welford developed a hood (similar to a hooded dryer in a beauty salon) that emits coherent laser light. Each treatment lasts 45 minutes to an hour. They also recently debuted a home unit that retails for $3,000 to $5,200. “Our engineer was instrumental in getting our FDA registration,” Welford says.

Along with developing a regiment of specially formulated shampoos, conditioners, vitamins, and serums, the business partners hired the franchise practice group at the law firm of Jaffe Raitt Heuer and Weiss in Southfield to roll out the program nationally. The franchise company, called LLLite Center for Hair Advancement, in Bingham Farms, plans to set up its first franchises in the Midwest and Florida.

“We’re also looking at a joint venture proposal in China,” Welford says. “We have a good mix of clients — 60 percent women and 40 percent men. The age range goes from 16 to 97. Our oldest client said she didn’t feel attractive anymore, so she came to us.” db  —R.J. King