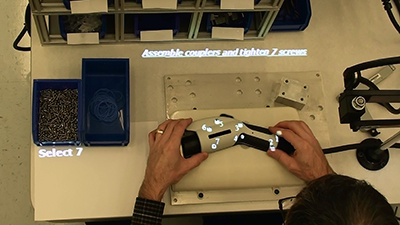 Paul Ryznar, a former vice-president at Detroit Diesel, is well aware that overcoming human error for workers on a factory floor is a common challenge for manufacturers.

Rather than set up an expensive post-production inspection system to prevent bad parts from reaching customers, Ryznar, who grew up on a small farm in Belleville, worked evenings and weekends in his basement to develop a projector-based software technology platform that guides workers and confirms the completion of assembly processes.

“I developed a digital operating canvas guide where we use overhead light from a projector to guide workers through the assembly process,” says Ryznar, the creator of what he calls Light Guide Systems, and president and CEO of OPS Solutions in Novi.

“If I were a waiter setting a table for dinner at a five-star restaurant for the first time, the system would flash lights and images from the overhead projector onto the table. From there, I would know where to set the water and wine glasses, the silverware, and the napkin.”

Founded in 2005, the company’s customer base includes dozens of factories operated by General Motors, Chrysler, and Case New Holland (CNH Industrial N.V.), among others.
According to a 2014 case study by Chrysler, assembly errors were reduced by 38 percent using Light Guide Systems over standard work instructions, while productivity (output) increased by 82 percent.

At first, Ryznar used a series of lasers to guide workers, but after four years he switched to commercial-grade projectors from Panasonic. The inventor describes the patented system — which can project instructions, blueprints, and videos — as a “plug-and-play system for the factory environment.”

“With flexible manufacturing in an auto plant, you have different vehicle models running down the same assembly line, with dozens of different options, colors, and trim levels to choose from,” Ryznar says. “You can see how complicated it can get. But if you sequence the projectors to the assembly line, you’re going to wind up with much better results.”

In addition to automotive, the technology is used in an array of industries including aerospace, agriculture, energy, heavy equipment, and medical devices.

“When the process is done right, you literally get a green light that says everything was performed correctly,” he says. “And when you don’t, it’s like a GPS system that tells you when you made a wrong turn and need to circle back. We’re also engaged with hospital innovation groups to explore bringing the technology into operationg rooms, which could really save lives.”

To prove out the technology, Ryznar had his 13-year-old twin daughters each build a fuel injector from scratch using the system. “It was a 16-cycle job, and they were able to do it without a problem,” he says. “It’s a simple system, and that’s a large reason why we’ve been able to double our revenue every year.” db