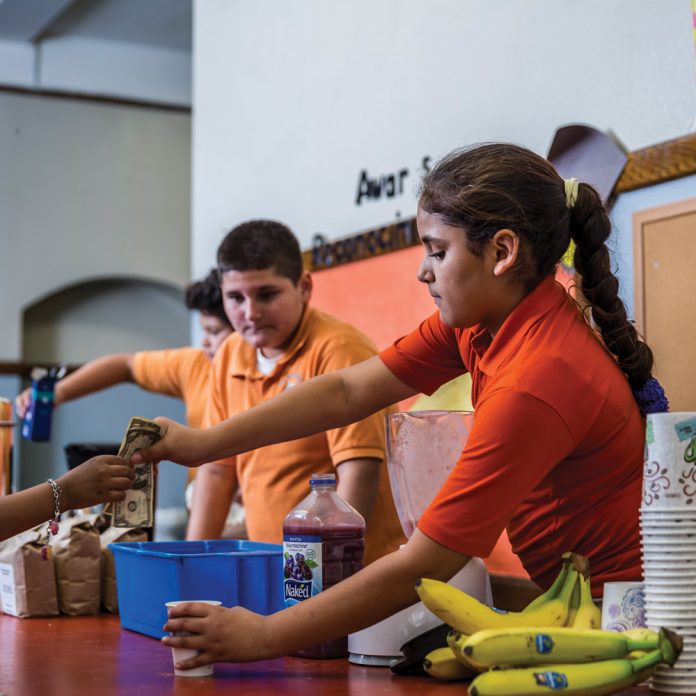 “Grownups need coffee.” Boiled down to the simplest of terms, those three words describe the business plan of Morgan Lantz’s fifth-grade class.

The 10- and 11-year-old students attend Escuela Avancemos Academy, an authorized charter school operated by the Detroit Public Schools in southwest Detroit. The students, who receive a bilingual education in English and Spanish, recently started a business to sell coffee to parents as they pick up and drop off their children at school.

“We thought it was a good idea,” says student Jaden Rosas, an aspiring automotive designer. “Grownups need coffee, so we knew it wouldsell really well.”

In addition to selling coffee, Lantz’s class offers a variety of fruit smoothies. “The kids like the smoothies, and their moms and dads buy the coffee,” says student Alessandra Banegas.

The coffee and smoothie shop, which is open four days a week at the EA Academy started out as Lantz’s way to teach her students about how businesses operate. However, the effort was soon turning a nice profit, which Lantz and her students decided to donate to a local charity.

As a result of their success, the class was named Young CEOs of the Year for 2017 by DBusiness magazine, based on reader nominations.

“It was crazy,” Lantz says. “We sold so much. When we started, we immediately made $100 a day. It was incredible.”

Lantz says the students are responsible for everything from preparing the coffee and smoothies to cleaning up the equipment and managing the money. The coffee retails for $1 per cup, or $10 a pound. The smoothies also sell for $1 per cup.

“I’ve learned a lot,” Rosas says. “I think it makes you a lot more responsible when you’re doing the work. And it’s good experience. I feel like I would be a really good business owner.”

In addition to running the business at school, the class also took their operation to a couple of business fairs. “They did so well,” Lantz says. “They really started to get some recognition, and you could just see their confidence
growing. The more they worked, the more they seemed to shine.”

Lantz says the project wasn’t just about teaching the basics of business; it was also about planting the seeds of entrepreneurism. “Our school is all about this community, especially this part of Detroit,” she says, “and we want the students to know, we want to tell them, ‘We would love for you to go to college.’ But we also want them to have the option of not going to college, and still being a really productive member of the community and being able to make a difference. They need to be able to see that when you work hard, you can start something great on your own.”